Ever since Guardiola took over at Man City last season, it has not been a very happy time for him. The first time in his coaching career that a Guardiola led team has performed so badly. But as soon as the league ended, Guardiola has pulled up his socks and is ready for the challenge that is about to come towards him next season.

The Spaniard is taking the Man City squad and turning it inside out. This means that a lot of players are leaving the club to make way for new recruits. And by the looks at how Guardiola is going about his business one might feel that he is creating a juggernaut.

And to be very honest if Guardiola does manage to get all his summer targets, then he might just build the greatest Man City line-up we have seen for quite some time.

After Claudio Bravo’s disappointing performance last season, Guardiola has already signed a suitable replacement in the form of Ederson Moraes. The 23-year-old arrived from Benfica with a price tag of £35 million. The second highest goalkeeper transfer in the history after Gianluigi Buffon.

Guardiola already has a young and versatile centre-back at his disposal in the form of Stones. The 23-year-old English International arrived at the Etihad for a fee of £47.5 million. At such a young age the player already has 18 caps for his national side and there’s no doubt he will be City’s centre-back of choice for years to come.

One one hand, Guardiola has the energy and youth of Stones and on the other, he has the experience of Nicolas Otamendi. This is Otamendi’s second season with City after arriving from Valencia in 2015. And without a shadow of a doubt, he is going to be Stones’ partner in crime at centre-back.

Guardiola is expecting Dani Alves to arrive at City on the back of a free transfer from Juventus. But we feel that Kyle Walker will be the coach’s right-back of the season. City have already opened negotiations with Spurs over the potential transfer. And it is just a matter of time before we see Walker walking around in a blue shirt.

Another highly talented youngster that is expected to sign for City in the coming weeks. While clubs like Chelsea and Liverpool have been chasing this 22-year-old, Mendy has made it clear to his current club Monaco that he wants to join Man City.

The most experienced and defensive minded midfielder that Guardiola currently has in his ranks. This is going to be Fernandinho’s fifth season with City and the Brazilian will be one of the first names on Guardiola’s team-sheet.

Silva is the magician that made things happen for Guardiola for most of the previous season. His understanding with both Aguero and De Bruyne is telepathic. And he can pick out passes from midfield that most players don’t even see.

Another player that is going to be in Guardiola’s starting eleven no matter what. Since arriving from Wolfsburg, De Bruyne has added a much-needed spark that was lacking in Man City’s attacking dynamics. On top of the that the Belgian is a selfless player who puts the team about his self.

Sanchez is one of the most talked about transfer in the past few months. Wenger is desperately trying to hold onto his star player but it is just a matter of time before he arrives at City. With the kind of flare and talent he possesses, Sanchez can light up any game. He is also a real hard worker who is willing to work his socks off. A talent that will certainly please Guardiola very much.

Bernardo Silva became the first signing for City in the summer after his €70 million move from Monaco. Essentially a midfielder but the Portuguese can play in a lot of other positions. And we feel that Guardiola will deploy him further upfield alongside the likes of Sanchez and De Bruyne.

This is going to be Aguero’s seventh season with the club. And in these seven seasons, the Argentine has turned into a darling for the City faithful. Guardiola will have no other option but to play the 29-year-old as his main man upfront. Not only because of his reputation but also because he has an eye for a goal. 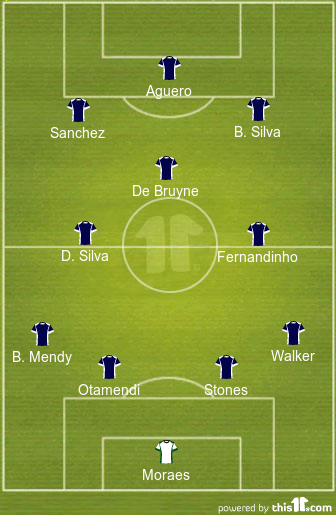 For more news and updates please follow: The Football Fan Base.

Arsenal have made a formal offer to sign this winger: It...