Chelsea boss Antonio Conte played with a 3-4-3 formation for pretty the whole of last season. And it effectively brought the best of out the Chelsea squad. The Blues were virtually unstoppable as well as unplayable. So there is very little doubt that Conte is going to implement the same formation this time around and that too with some fresh players.

We take a look at how Chelsea will line-up for most of the season:

Belgian International Thibaut Courtois will be the first choice keeper for Antonio Conte for most of the season. But the Blues have also signed Willy Caballero from Manchester City to stand in between the posts against the second fiddle teams.

Conte likes to play three defenders at the heart of the defence who are supported on occasions by two wing backs. Conte will most likely start with David Luiz as his central defender supported on either side by Cesar Azpilicueta and new signing Antonio Rudiger.

Chelsea will field four midfielders out of which two will play more centrally and two will be on the wings. The midfield roles will most definitely be shared between the French duo of N’Golo Kante and Tiemoue Bakayoko.

The right side of midfield will have Victor Moses who has virtually redefined himself as a wing-back under Antonio Conte. While the other wing-back duty will most likely be handed over to Marcos Alonso.

After Antonio Conte decided to offload Diego Costa, the Italian manager has gone on and spent a huge amount of money in order to bring Alvaro Morata to Stamford Bridge. So without a doubt, the Spaniard is going to be the chosen frontman for the Blues. He will be the focal point of every Chelsea attack and will be supported on either side by Eden Hazard and Pedro Rodriguez.

But having said that Hazard might not be available for the first few games as he is still recovering from an injury, so most likely Willian will fill in for the Belgian. 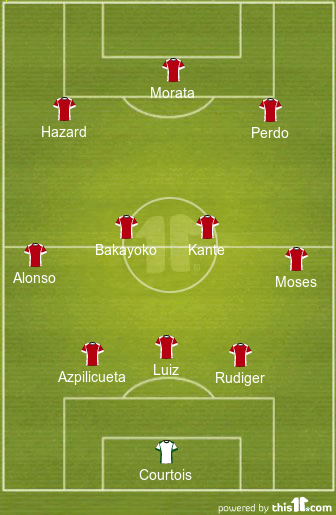 The Football Fan Base view:

While we believe that Chelsea will line-up in the 3-4-3 formation for most of the season but he can also switch to a 3-4-2-1 formation in which both Hazard/Willian and Pedro will move further inside the pitch to provide more space to the likes of Alonso and Moses.

THANK YOU: Premier League finally takes a firm stand against a...