Last season saw Real Madrid retain their title of European Champions, being the first team in the history of the Champions League to achieve the feat. Truly the undisputed Champions of Europe, they will be heading into the UEFA Super Cup to stamp their authority and further their tag of Champions. With a world-class squad being led by a world-class manager, the onus is on Real Madrid to continue their dominance on the European Stage.

Let’s assess the predicted lineup and formation Zidane might use in Macedonia.

Much had been made of the David de Gea speculation, but quelling all of it with his stellar performances is Real Madrid’s shot stopper, Keylor Navas.
His saves last season have been vital for Real Madrid in their successful pursuit of the League and the Champions League. After yet another summer of the relentless de Gea rumours, as things stand, Navas will be Real Madrid’s #1 heading into the next season.

Dani Carvajal will be Zidane’s number 1 choice for the Right-Back position heading into the new season. He has pretty much stamped his authority on the right-hand side of the Madrid defence and is generally one of the first names on the team-sheet whenever fit.

Another of Real’s standout performer in their successful 16/17 campaign was 27-year-old CB, Nacho. He took full advantage of Raphael Varane’s injury lay-off, forging a successful central defensive partnership with Sergio Ramos.
His versatility also counts as an added bonus, as he can be shifted to either right back or left back to accommodate another central defender if needed.

A Real Madrid player, through and through, Ramos exemplifies the determination required to wear the all-white jersey. His football ability seems to mature with age. His experience is vital and just his mere presence is sometimes all that is needed to stop the opposition attacks. He is another of the indispensable names on the team-sheet, and if fit, he could be tasked with keeping the Manchester United forward line at bay in Macedonia.

Real Madrid can boast of possessing one of the best left backs World Football has seen. Marcelo is the definition of perfection down the left flanks. His devastating partnership with Ronaldo has left opposition defenses in their wake. It’s rare to find a Real Madrid XI without Marcelo in it, and one can expect him to be a handful for Antonio Valencia when the two sides meet.

Casemiro is one of Real Madrid’s most vital piece in their midfield jigsaw. He perfectly complements the defense and the attack, with his dogged displays in the center of the park. His alertness to douse opposition attacks coupled with his ability to keep the opposition midfielders busy provides Kroos and Modric, the two midfield magicians the freedom and space to weave their magic. The three combined their styles to perfection last season, and it’s hard to see why Zidane would change a winning formula.

Isco has had to wait for his chance, and when he got it, he took it with both hands. Having displaced Gareth Bale from the starting XI, Isco has cemented his place as a winger and a creative-free roaming #10 in Real’s famed attack. His revered dribbling ability was there for everyone to see as he decimated opposition defenses last season. Expect him to be a regular starter in the next season.

Ronaldo and Benzema have, for the better part of 8 years, formed a formidable partnership up front for Real Madrid. Their devastating link-up play is known to open various avenues for attacks and goalscoring opportunities.
Last season saw Ronaldo being featured as a traditional #9 and Benzema being deployed at the wings, owing to Ronaldo’s supreme positioning ability.
They enjoy the freedom of playing anywhere on the forward line. With no signification signings up front, Zidane might not hesitate in using this formula again next season.

Real Madrid can line up in a potential 4-3-3 formation, as depicted below. 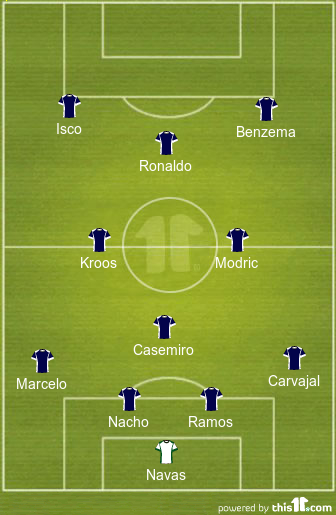 Liverpool could receive a massive injury boost right before the new...

Man City vs Liverpool: How will Pep Guardiola line up his...

Here’s how Google Search will enhance your FIFA World Cup 2018...