Jurgen Klopp’s men take on Watford on the opening weekend of the Premier League and the German coach will be hoping that his team can replicate this summer’s form and pull out a title winning campaign.

We take a look at Liverpool’s predicted XI that Jurgen Klopp might start with at Vicarage Road.

Both Mignolet and Karius have shared preseason duties for Liverpool during the summer. But without a doubt, the Belgian International will be in charge of the gloves for the Reds.

Without a shadow of a doubt, Jurgen Klopp will go with James Milner on the left-hand side of the back four. No brainer this one.

This is Gomes’ second season with the Reds and he will once again take his place in the right-back position.

Matip had a really slow start to the season last time around but as the season picked up the Cameroonian International too upped his game. The 26-year-old is going to take his rightful place at the heart of the defence.

Even though Dejan Lovren faces a stiff competition from Ragnar Klavan for the centre back role but we have a feeling that Jurgen Klopp will not like mess around with the Matip and Lovren partnership.

The Dutchman had a wonderful preseason and was easily one of the best Liverpool players on the tour. He is a guaranteed starter.

The German will most likely take the place of Jordan Henderson in the centre midfield after the Liverpool captain missed the club’s preseason match against Atleti due to illness.

The Brazilian has become one of the most talked about footballers in England right now but Jurgen Klopp has made it clear that Coutinho is not for sale. And if the Reds coach’s statement holds true then Coutinho will surely start the match against Watford.

The Egyptian returns to England for a second stint and this time he will be eager to impress in the Red of Liverpool. Another guaranteed starter.

Another Liverpool player who had a fine preseason. The Brazilian scored four goals in preseason and will operate from the left wing.

Liverpool’s signed the 19-year-old from Chelsea this summer for a reported fee of £3 million and Jurgen Klopp will definitely give him a start during the opening weekend. 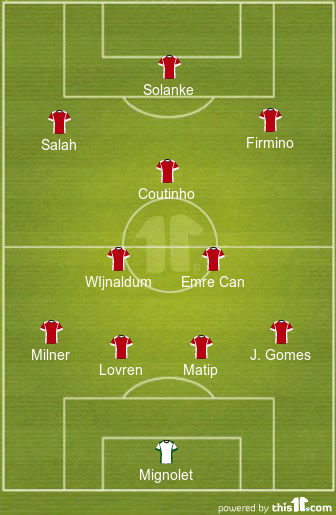 Man United reportedly reignite their interest in this Serie A superstar: Right choice?

Man United reportedly reignite their interest in this Serie A superstar:...

Chelsea might fail to secure the signing of Kepa’s heir this...

Football pundit has the perfect verdict about ‘this’ Arsenal player after...

Out for almost two months, but will ‘this’ England international start...