Manchester United win the first ever Manchester Derby held outside of the United Kingdom by a scoreline of 2-0. Even though this was a non-competitive pre-season game but a win against the arch rivals counts as nothing less.

We take a look at 3 talking points for United from the game:

Everyone is running that extra mile:

One of the major disappointments for United last season was the fact that they played out too many draws. Somehow the team lacked that cutting edge to finish a game. A trait that has been in the DNA of every United team down the generation. While every player was doing their bit, but no one was willing to go that extra mile.

But on Derby day, we saw a totally different team. Or should we say we saw the old United. Players who were willing to work hard, track back and win back the ball. Players who were willing to take that extra bit of risk while going forward. Every single player in the team seems to be a new person. Even Marouane Fellaini looked a totally different player. Apart from the big signings and getting back in the Champions League, this has to be one of Jose Mourinho’s biggest achievements during his time at Old Trafford. He might just have successfully brought back the belief that the Red Devils so badly needed.

When United bought Henrikh Mkhitaryan from Borussia Dortmund in 2016 he was one the best attacking midfielders in Europe at that point in time. But his start at the club was far from convincing. He was benched for the first few months by Mourinho simply cause the coach felt that the Armenian was not quite ready for life in the Premier League. But Mkhitaryan took it in a positive way and decided to work harder. And it looks as if his dedication has finally paid off. The 28-year-old looked sharp in midfield during the derby. He came up with some fine runs and provided a few great through balls.

It looks his Henrikh has finally found his old form back and will undoubtedly be a regular for Mourinho during the next season.

Shortly after Romelu Lukaku signed for United he said that he had full faith in Mourinho and was willing to go through a brick wall for him. And the Belgian is living up to his word, well up until now. Lukaku is came down to receive the ball, linking up with his attacking partners and also tracking back. These are traits that you don’t normally associate with the 28-year-old, but he did that.

And the likes of Lingard, Martial and Rashford are trying pretty hard to form a partnership with the big man. Throughout the whole match, all three were trying to build an understanding with United’s big money signing. We know that such partnerships do not happen overnight. But if they do manage to understand each other then we might just in for a very exciting season.

Man United reportedly reignite their interest in this Serie A superstar: Right choice?

Chelsea might fail to secure the signing of Kepa’s heir this summer: Here’s why 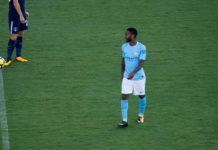 Man United reportedly reignite their interest in this Serie A superstar:...

Chelsea might fail to secure the signing of Kepa’s heir this...

Should Arsenal get rid of this playmaker in the summer?

Can this 25 Y/O really be the replacement for Paul Pogba?

Cesc Fabregas on why he chose to go to Chelsea instead...