Gone are those days when clubs used to spend each penny keeping in mind their earnings.

Earlier each and every team would meticulously calculate their incoming revenue and would then dive into the transfer market to sign players.

But now teams don’t think twice before signing a player. No matter how much the cost.


And this careless has resulted in negative balance sheets for almost every big club in Europe.


So the CIES Football Observatory have decided to take a look at the balance of the club as of 2018.

CIES takes into consideration the total earnings made by a club during the past eight years and then compared them with the money they have spent during that same period.


Defending Premier League champions Manchester City top the list with a negative balance of €1032 million. Guardiola’s side have spent €1470 million from 2010 until 2018 while they have earned just €438 million during that same period.


The next club on the list if PSG which like Manchester City is also owned by a middle eastern owner and the French side current have a negative balance of €874 million.

But after heavy spendings, PSG do have a positive balance of €103 million during 2018.


The likes of Chelsea, Liverpool and Manchester United all make it to the list while London outfit Arsenal are ninth on the table with a negative balance of €286 million. 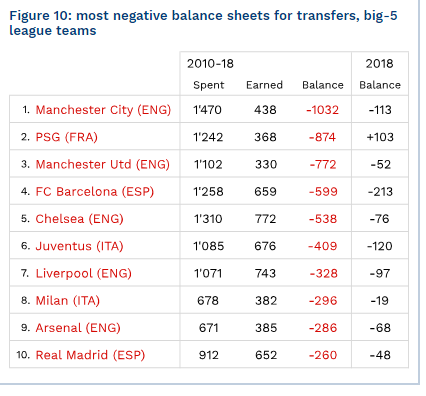 Read: Which club has spent the most money on transfers during 2018?

Read: Which European club has spent the most amount of money in the transfer market in the past decade?

Read: FA shortlists the next probable managerial candidates for England as Gareth Southgate hints at exit.

Read: Here are the worst transfers during the summer transfer window.

Read: Here are the 15 best transfers during the summer transfer window.

Read: Top Premier League manager impressed by Steven Gerrard’s start at Ranges despite his team picking up only one win. 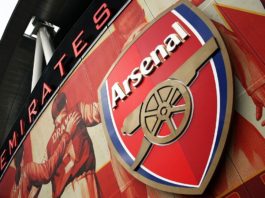 Mikel Arteta sends out a strong warning to his players before... 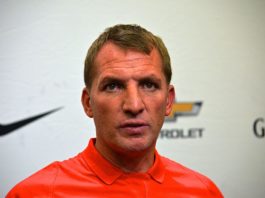 Leicester City suffer a triple injury blow before their clash vs... 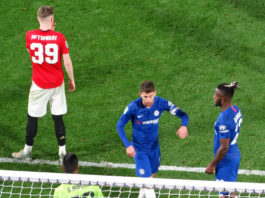 Will Jorginho finally get a start in midfield as Chelsea take...