The Premier League season of 2018-19 is easily one of the most competitive seasons that we have seen for a very long time.

As many as three clubs are still unbeaten and with that, the fight for the title is heating up with each passing game.

Manchester City are sitting at the top of the table with Liverpool and Chelsea right on their heals. But still, most of the pundits and fans are placing their bets on Pep Guardiola’s side to defend their title.


Liverpool too have managed to tighten up their defence and some people feel that the Anfield outfit will finally be able to break their trophy drought.


Manchester United, on the other hand, are 12 points adrift the top spot and chances are that Jose Mourinho’s men will not be able to qualify for the Champions League next season.

And now the good folks at talkSPORT have tried to predict how the league table will look like at the end of the season – with the help of a supercomputer.

Read: Is ‘this’ Premier League club about to receive a transfer ban?

Read: Chelsea and Everton join Man United in the race to sign ‘this’ West Ham star.

Read: While every other player is moving to Asia for the money, ‘this’ Premier League star chose to do otherwise.

Read: Another Mourinho mistake: Is ‘this’ Man United star on his way to Italy?

Can Chelsea manage to pick up all three points vs Manchester United?

Arsenal receive a double injury boost before their clash against NUFC 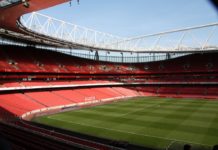 Will this defender be fit enough to start against Newcastle United?

Can Chelsea manage to pick up all three points vs Manchester...

Arsenal receive a double injury boost before their clash against NUFC

Will this defender be fit enough to start against Newcastle United?

Can Arsenal finally pick up a win vs NUFC this weekend?

Will Liverpool indulge in another goal fest against Norwich City?

Why did Jose Mourinho take off Marcus Rashford during the draw...