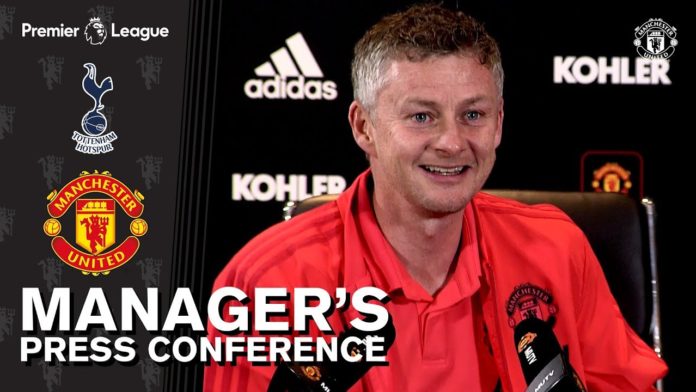 Manchester United will take on Spurs at Wembley this Sunday and many fans are hoping that the Red Devils can continue their good form into this game.

Ever since Solskjaer has taken charge of the club, the United players have been given a free rein and have also been urged to play more attacking football.

And many fans are hoping that Man United will play the exact same way on Sunday.

But Solskjaer clearly has other ideas.


“When you play against a good team you’ve got to defend and earn the right to win a game of football,” Solskjaer told Soccer AM(as reported by MEN).

“We’re not just going to go gung-ho and go naive, but as you say Man United is about attacking football. We’ve got to go there and attack the game.

“We have to win to stand a chance of going past them in the league.


“We go there to take three points. Walking out at Wembley with a Man United shirt on, I think that brings the best out of quite a few players so hopefully, we can see that tomorrow.”


“We’ll just go through the last couple of details before the Spurs game and travel down by train [on Saturday evening] and then just rest and have a few meetings with the players and we’re all set for the game.

“It’s going to be a fantastic one I’m sure, two teams who play attacking football.”

Manchester United have scored 16 goals in five games ever since Ole Solskjaer took charge of the club but clearly going by the manager’s comments we do not expect to see a goal fest on Sunday.


Not atleast from Manchester United.

Read: Here’s what Solskjaer has brought to Man United since he took over.

Read: Here’s how Man United could line up vs Spurs at Wembley.

Read: Man United star could be ruled out when Manchester United take on Spurs at Wembley.

Read: ‘This’ Man United player reveals what the team have achieved under caretaker boss Ole Solskjaer.

Is Edouard Mendy going to replace Kepa in front of goal vs West Brom?

Will Man United taste yet another defeat in the PL, this time against Brighton?

Will West Brom be able to cause the Chelsea backline any sort of problems?

Is Edouard Mendy going to replace Kepa in front of goal...

Is Edouard Mendy going to replace Kepa in front of goal...

Pep Guardiola is likely to have a major selection crisis vs...