Alexandre Lacazette had been in pretty decent form for Arsenal last season but this year, the Frenchman has seen a dip in form.

During the 2019-20 season, Alexandre Lacazette has featured in 9 games across all competitions for the Gunners but have managed to find the net only two times.

And this form is just reminiscent of the way the whole team have been playing during the past couple of games.

Arsenal lost their previous league game vs Leicester City which meaning they have now managed to gather just 17 points from their first 12 games and their last win in the league came during the first week of October.

But according to Alexandre Lacazette, they still have the chance to change things around, it’s just that they need to get back their confidence.

Lacazette told France 24: “Last season when we were unbeaten in 20 games in a row nobody said anything about the coach or manager,

“We miss confidence and we need the international break. I hope we are going to come back well. We want to be top four, of course. Now we are nine points behind Chelsea and Leicester and it is going to be hard, but everything is possible in football.

“We are very disappointed, we had chances in the first half [against Leicester]. We couldn’t score and you need to take your chances in this type of game.

Arsenal have been trying for some time now to get Pierre-Emerick Aubameyang & Alexandre Lacazette to sign new contracts, but so far talks have proved unsuccessful, with both players wanting to play in the Champions League & keeping their options open. [@charles_watts] #afc pic.twitter.com/qstGJE8QLF

“We have to work again and keep working every day. But I think we didn’t play so bad, we just missed our chances in the first half.

“We want to be top four of course. We are nine points behind Chelsea and Leicester and it is going to be hard but everything is possible in football.

‘”We still have time until the end of the season. We are going to work to come back.”

Arsenal have managed to net only 16 goals in the Premier League this season but at the same time, they have conceded 17 goals. This means their goal difference is currently -1 which is the lowest amongst the top nine sides of the league.

Clubs like Leicester City, Chelsea and have goal differences in double figures while Arsenal are struggling to even keep clean sheets during their matches.

Read: Despite receiving support here’s when Unai Emery could be sacked.

Read: Pundit explains what Arsenal should do with Unai Emery amidst the team’s poor form. 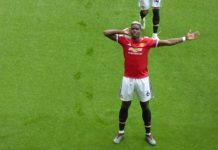 Here’s how Harry Kane’s penalty appeal vs Tunisia has helped other...