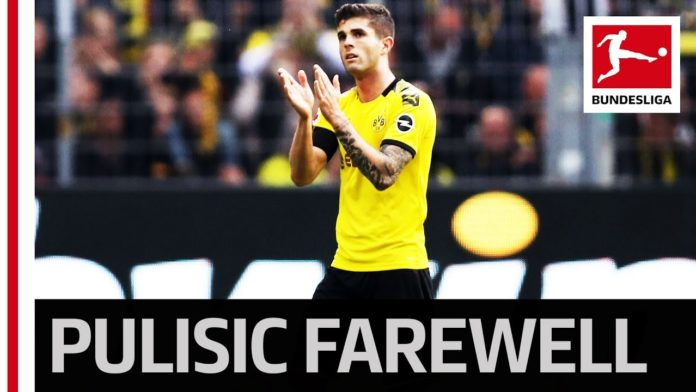 Chelsea signed Christian Pulisic from Borussia Dortmund during the January transfer window but the youngster was immediately loaned back to the Bundesliga club.

The youngster came up through the ranks at BVB and during the past couple of seasons, the 20-year-old has caught the attention of a number of top European clubs.

The Blues have made a fine signing in the form of Christian Pulisic and the winger will surely play a key role next season for the London club since the club cannot sign any new players during the summer.

And speaking after playing his final home game of the season for Borussia Dortmund, Christian Pulisic said that he is most eager to play alongside N’Golo Kante next season.

“It feels amazing and I’m super excited to get started with Chelsea,” Christian Pulisic told the club’s official website(as reported).

“It’s going to be an amazing experience, one I can’t wait for, and to be here in England, speaking English again and meeting all the guys is something I’m thrilled for.

“I’ve been waiting a long time for this and playing in the Premier League has been one of my biggest dreams.

“To be a Chelsea player is a huge honour and something I’m really excited for.”

“I’m excited to play alongside N’Golo Kante, I think he’s a fantastic player and I can’t wait to meet him,

“Also there’s the guys in the backline, players like David Luiz and [Antonio] Rudiger, I’m looking forward to working with them and I think it’s going to be really cool.”

Surprisingly, Christian Pulisic did not mention the name of Eden Hazard which is another clear indication that the Belgian international might very well be on his way out of the club.

Recent reports have suggested that Hazard has agreed on a deal to join Real Madrid and it will officially be announced after the Blues wrap up their Europa League final vs Arsenal.

Read: Here’s how Chelsea can replace Eden Hazard despite a transfer ban.

Read: Chelsea have found a replacement for Eden Hazard but the Liverpool fans will not like it.

This French flop might not be heading to the Premier League: Blessing in disguise for Arsenal?

This 22 Y/O centre-back might snub a move to the Premier League: Where’s he headed to next season?

This French flop might not be heading to the Premier League:...

This 22 Y/O centre-back might snub a move to the Premier...

This French flop might not be heading to the Premier League:...

This 22 Y/O centre-back might snub a move to the Premier...

Arsenal & Everton could miss out on this 22 Y/O defender:...

Will Jose Mourinho rival Manchester United in the signing of this...