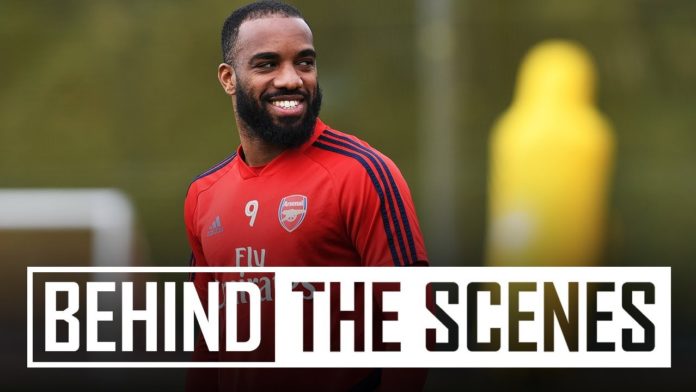 Arsenal are currently sitting in the 3rd spot of the Premier League table and next up they travel to Bramall Lane to take on Sheffield United on Monday.

The Gunners have so far managed to lose just a single game and many believe they will pick up yet another win on Monday especially since Unai Emery has a fit squad to choose from.

And speaking before the match, the Arsenal boss was asked whether Alexandre Lacazette is fit enough to play vs Sheffield United.

The Frenchman has missed a number of matches due to an ankle injury and the manager has stated that he has now returned back to training. While Emery has not clearly revealed what he intends to do with the forward but one thing is for sure – Lacazette will not be starting at Bramall Lane on Monday.

Emery told the club’s official website: “Today is his[Alexandre Lacazette] first training back with us.

“He finished it well and he’s feeling well with his injuries. Tomorrow we will be training again and he will be with us. We will decide.

“The most important thing is that first, he is training, then secondly it’s whether he can be with us and it depends how he can feel in the next days training with us, whether his ankle is not giving him any more problems.

“It’s positive for us that he’s started training and that he’s a possibility for Monday. I don’t know whether he’s ready for 90 minutes or on the bench.

“We’ll decide that over the next days, but it’s very important for him to come back to training with us.”

The manager also updated that summer signing Kieran Tierney is fit and ready to play and there is every possibility that the youngster might start at left-back.

Talking about the possibility of Kieran Tierney playing on Monday, the manager added: “He’s ready to play. Now we have two options in that left-back role with Sead Kolasinac and him. We’re going to play a lot of matches after Monday.

“We will need every player. It depends on how he comes into the first training with us, Sead, after his international matches.

“We now have two players in that position and we can use one on Monday, it depends on how they are, one or the other.”

Read: Sheffield boss explains why Arsenal will have a tough time at Bramall Lane.

Read: Arsenal supremo reveals why this superstar is not getting adequate game-time.

Has Mikel Arteta been able to chance this under-performing star under his guidance?

Arsenal legend predicts the league position for the Gunners at the...

Has Mikel Arteta been able to chance this under-performing star under...

Here’s two things Arsenal need to do in order to pick...

Will this Man United man prove to be the difference against...

Spurs could get back two key first-team players when they take...

BREAKING: Arsenal finally announce their new boss, but when will he...

This player explains why Arsenal were ‘lucky’ not to lose against...