The 2018-19 season has been a really mixed bag campaign with no one particular team dominating the European scene.

While Man City have won the Premier League but once again they struggled in the Champions League and were knocked out by Spurs.

Liverpool on the other hand, beat Spurs to lift the UCL trophy but missed on the EPL by just a single point.

Real Madrid have been the dominant force in Europe over the past couple of seasons but this time, they were humbled by a superb and vibrant Ajax side.

Chelsea had a really poor campaign domestically but Sarri’s men managed to end the season with a silverware by winning the Europa League – beating Arsenal.

And after the season has ended, Coach Reputation Ranking has made a list of the top 10 managers for the 2018-19 season.

Last year, it was Zinedine Zidane who won the crown of the best football manager but this year it is Pep Guardiola who has been bestowed with the honour.

Manchester City were superb in the Premier League and they managed to defend their domestic crown despite continued pressure from Liverpool. So, Guardiola being named the best football manager is not debatable.

But a number of names on the list are surely surprising.

And perhaps the biggest surprise is the name of Unai Emery who is the 8th best manager as per the rankings which is a bit surprising given, the Gunners lost the Europa League final to Chelsea and also finished fifth on the Premier League table.

Zinedine Zidane surprisingly makes it 3rd on the list despite being in hiatus for most of the 2018-19 season.

Zizou left Real Madrid at the end of the 2017-18 season and was only reappointed at the Bernabeu in March of this year. And he managed only 11 games this past campaign.

“Despite the disappointment of being knocked out of the Champions League and the increasing competitiveness in the English game, Guardiola has managed to hold onto his place in the top 5,” Mario Gurrionero, who was involved in compiling statistics for the study said(via Give Me Sport).

“Manchester City’s consistency and his great influence in the world of football are two of the factors which have enabled him to end the season as the most highly reputed coach right now.” 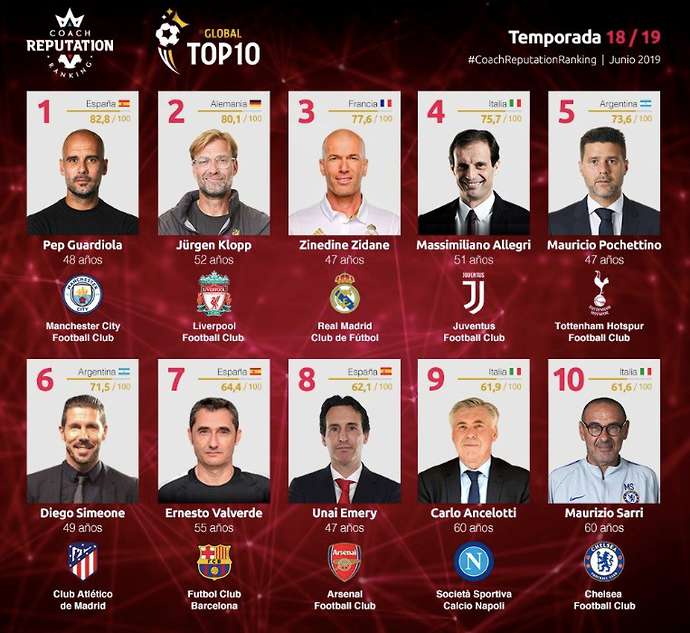 Read: UEFA plan another major overhaul in Europe but this time fans are not angry.

Read: Liverpool and Man United to play in the EFL Trophy.

Read: ‘This’ new rule in the Premier League might help players ‘CHEAT’ a lot more.

Read: What happens if Manchester City receive a Champions League ban next season?

Read: Here’s why almost every league in Europe is opposing to the Champions League reforms.

After Chelsea is ‘this’ Premier League club also going to receive...

Why did the Egypt goalkeeper refuse to accept the MOTM award...

Is Lionel Messi really comparable to Pele: What does Tite think?