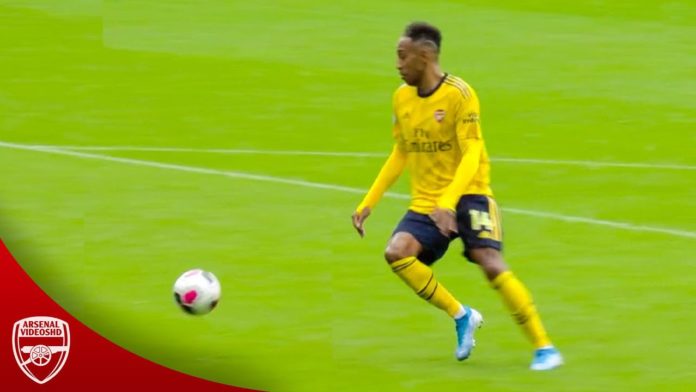 Arsenal brought in Pierre Emerick Aubameyang from Borussia Dortmund during the January transfer window of 2018 and last season he proved his worth to the club.

During the 2018-19 campaign, played in 51 games across all competitions for the Gunners and ended up scoring 31 goals and making 8 assists.

Out of these 31 goals, 22 came in the Premier League which also helped him win the Golden Boot alongside Sadio Mane and Mo Salah.

But this season there have been some whispers that the manager wants to use Aubameyang on a wider role in order to accommodate Alexandre Lacezette upfront.

While some pundits have reached the conclusion that using Aubameyang out wide might not be a good idea but the Gabon international has now come out to make it clear that he is more than happy to play on the wings if his manager demands it.

“If asked, playing out wide is not a problem,” he said.

“I’ve played a lot of times on the right and the left during my career, so I am used to it.

“You have to run a bit more! You have to provide a few more crosses for the guys in the middle.

“My target this year is to get more goals than last season,

“It was only my first full season so I can be happy because I shared the Golden Boot with Salah and Mane from Liverpool. It was a big challenge, but I did it and I’m really happy.

“This season, first of all, hopefully, we can reach our goal of qualifying for the Champions League and of course, personally yes, if I can get more goals than last season, I’d be happy.

“Hopefully it’s going to be a good season for Arsenal.”

Arsenal take on Liverpool at Anfield on Saturday and Unai Emery would want to use all the firepower that he has got in his disposal which would naturally mean that Lacazette starts as a traditional No 9 while Aubameyang and Nicolas Pepe are deployed on the wings.

Read: Here’s how Arsenal can match up with Liverpool this weekend.

Read: Liverpool could expose the weakness of ‘this’ Arsenal new-boy on Saturday.

Read: Unai Emery could pull off some major tactical surprises vs Liverpool.

Read: ‘This’ player looks in line to start for Arsenal vs Liverpool next weekend.

Chelsea & Man United could both miss out on this massively important signing: Here’s why

Arsenal player wants to leave the club this month: But does Arteta want him out?

Chelsea & Man United could both miss out on this massively...

Arsenal player wants to leave the club this month: But does...

10 talking points from Gameweek 2 of the English Premier League

4-3-1-2 Arsenal’s predicted line-up vs Huddersfield: How many injured players will...

Spurs vs Arsenal: 4-3-2-1 Arsenal’s predicted lineup for the London Derby