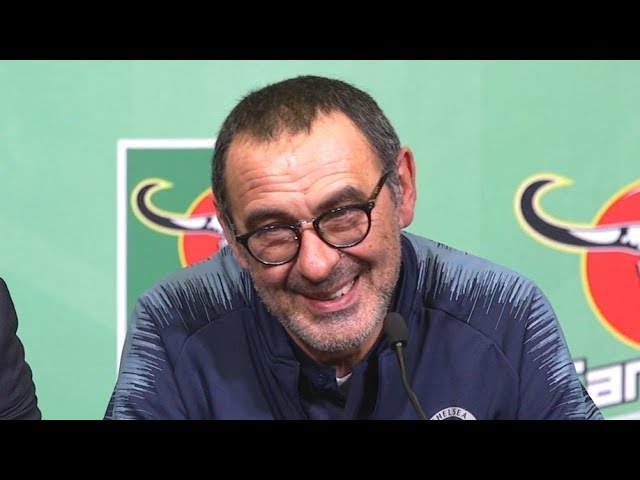 Maurizio Sarri and Kepa Arrizabalaga have been the centre of attention for the footballing world ever since a bizarre incident took place during the Carabao Cup final.

The Blues lost the game to Manchester City on penalties but that win for Guardiola’s men has been completely overshadowed by Kepa who refused to be substituted by Willy Caballero late into extra-time.

As Chelsea’s second choice keeper waited on the touchline to come on, Kepa frantically waved his hands signalling that he did not wish to come off.

This clearly left Maurizio Sarri furious and everyone else shocked but ultimately it was the keeper who had the final say.


After the match everyone expected Sarri to burst out with anger but instead, the Italian played down the whole incident claiming it was only a misunderstanding.

“I understood he had cramp, so I didn’t want the goalkeeper to go to the penalties in that physical condition,” Sarri said about Kepa.

“I realized the situation after three or four minutes when the doctor arrived on the bench.


“I wanted Caballero on the pitch, but the goalkeeper wanted to let me know he was in condition to go to the penalties.


“It was only a big misunderstanding. Kepa was right but in the wrong way. Wrong in the way he conducted himself, but mentally he was right because he was able to go to the penalties.”

This has led many to believe that the pair have buried their hatchet and that things will return back to normal pretty quickly.

But football legend Ruud Gullit has a completely different take on Sarri’s comments.

“This is just a political answer for the newspapers so that there is no confusion the next day but everyone knows what happened,” he said on Match of the Day 2(as reported).


“The way he reacted on the touchline said everything.


“I think that he wanted to take him off because he wanted the goalkeeper who knows the players of Manchester City and that’s Willy Caballero.

“I think the goalkeeper because he was injured, thought he wanted to substitute him because of his injury and he said ‘no, I’m fine.’

“And then in that moment, I don’t know if someone came to him and said why he wanted to take him off, but he refused to go off.

“I think that undermines the manager.”


Chelsea will take on Spurs in the Premier League on Wednesday and all eyes will be Maurizio Sarri’s team sheet to see whether Kepa makes it infront of the sticks.

Read: Here’s what Maurizio Sarri might be planning to do with Kepa after his Carabao Cup mutiny.

Read: Amidst rumours of losing the dressing room, there is one player who stands beside Maurizio Sarri.

Arteta opens up about the future of this key player at the Emirates: Staying or leaving?

Are Chelsea planning to sell this once key player during the...