Almost all the footballing leagues in Europe are currently suspended due to the COVID-19 pandemic and there are growing fears that the 2019-20 season might have to be declared null and void if the situation does not start getting better soon enough.

UEFA though is adamant to wrap up the whole season and are doing their best to ensure that the domestic leagues can finish their remaining games during the summer.

The governing body for football in Europe has already pushed the EURO to 2021 and have also announced the temporary suspensions of the Champions League and the Europa League, all in the hope that this will give time to the domestic tournaments to finish their respective seasons.

But in the scenario that no more games are played from here onwards almost every footballing club in Europe will suffer a major setback in terms of player transfers during the upcoming transfer window.

Already there are doubts as to when the summer transfer window will begin and now according to the CIES Football Observatory the abrupt abandoning of leagues could cause a massive decrease in player’s transfer values.

The report claims that teams could lose millions and millions of euros in the transfer market and overall “the total player transfer value at big-5 league level would decrease by 28%: from €32.7 to €23.4 billion”.

Premier League defending champions Manchester City will be the biggest victims with a 30.3% decrease in players’ transfer values from €1361m to €949m.

The next in line are FC Barcelona who will lose €366m in terms of players’ valuations during the summer.

Third, on the list are defending Champions League winners Liverpool FC whose players could lose around €353m in terms of valuations at the start of July if this COVID-19 pandemic cannot be contained soon enough.

Here’s the list of the decrease in total transfer value for some of the biggest clubs in Europe from the 11th of March up until the 30th of June when all the players’ contracts are set to expire. 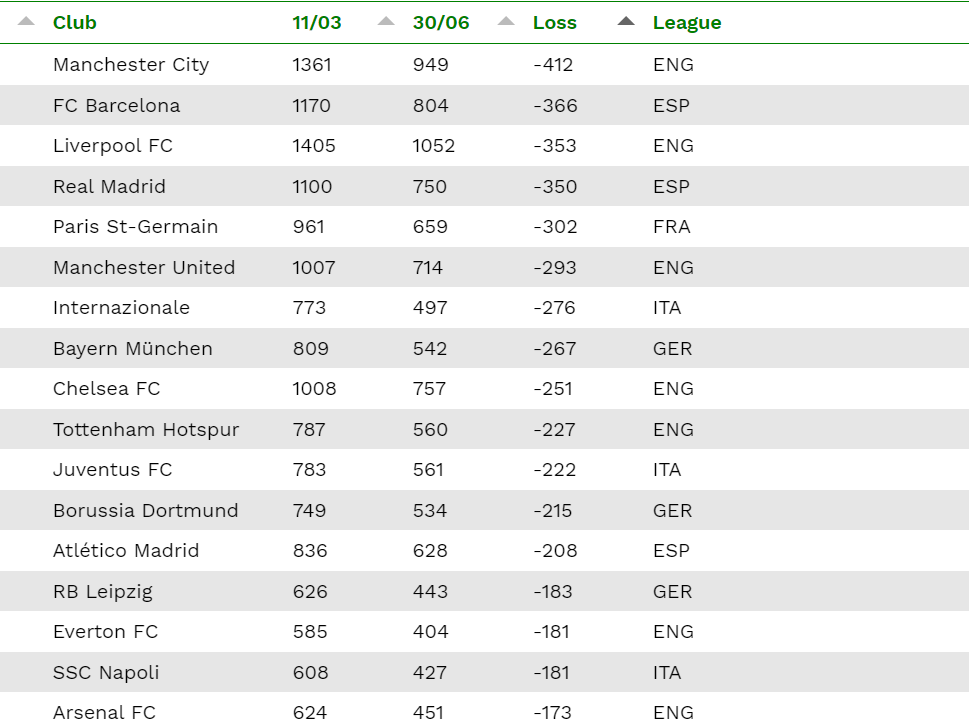 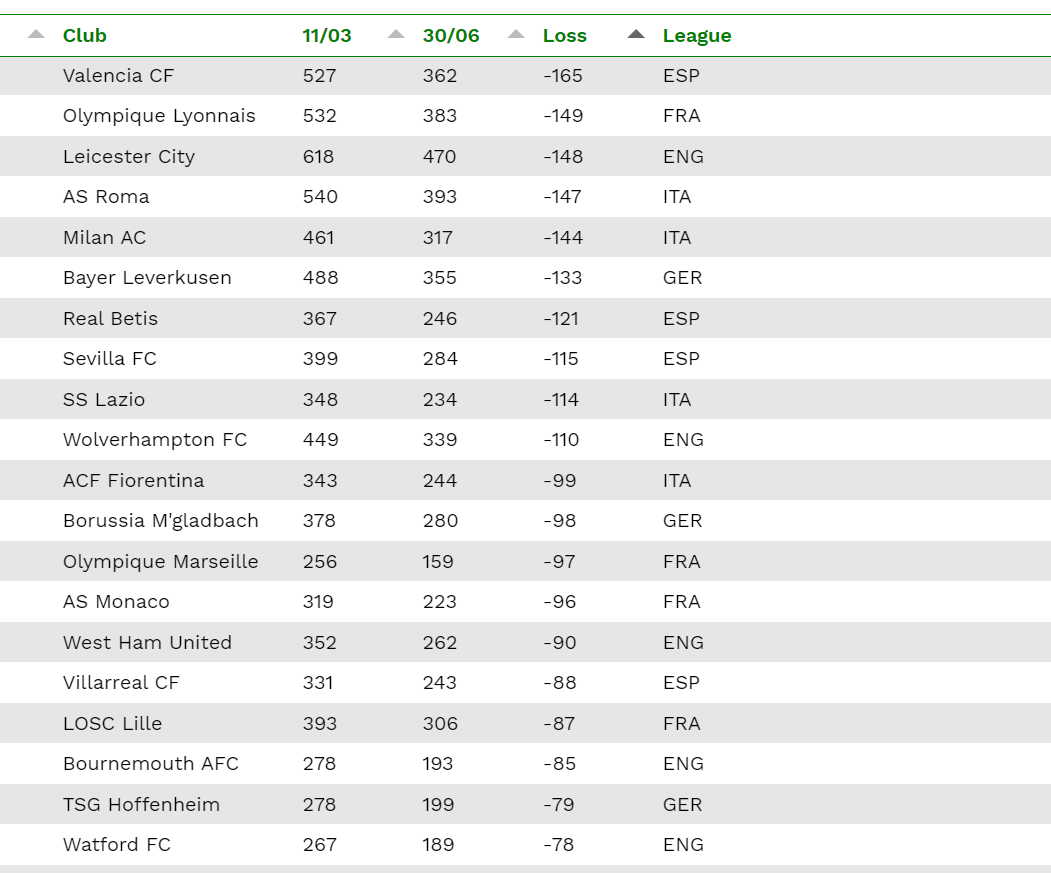 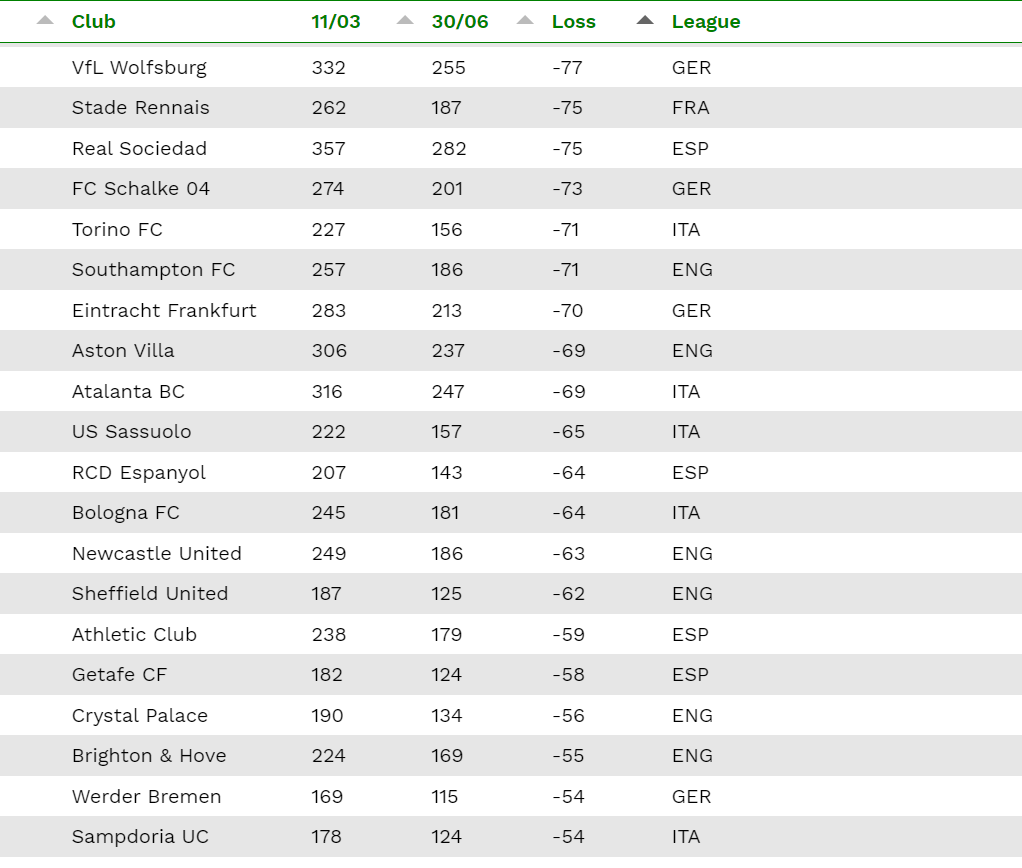 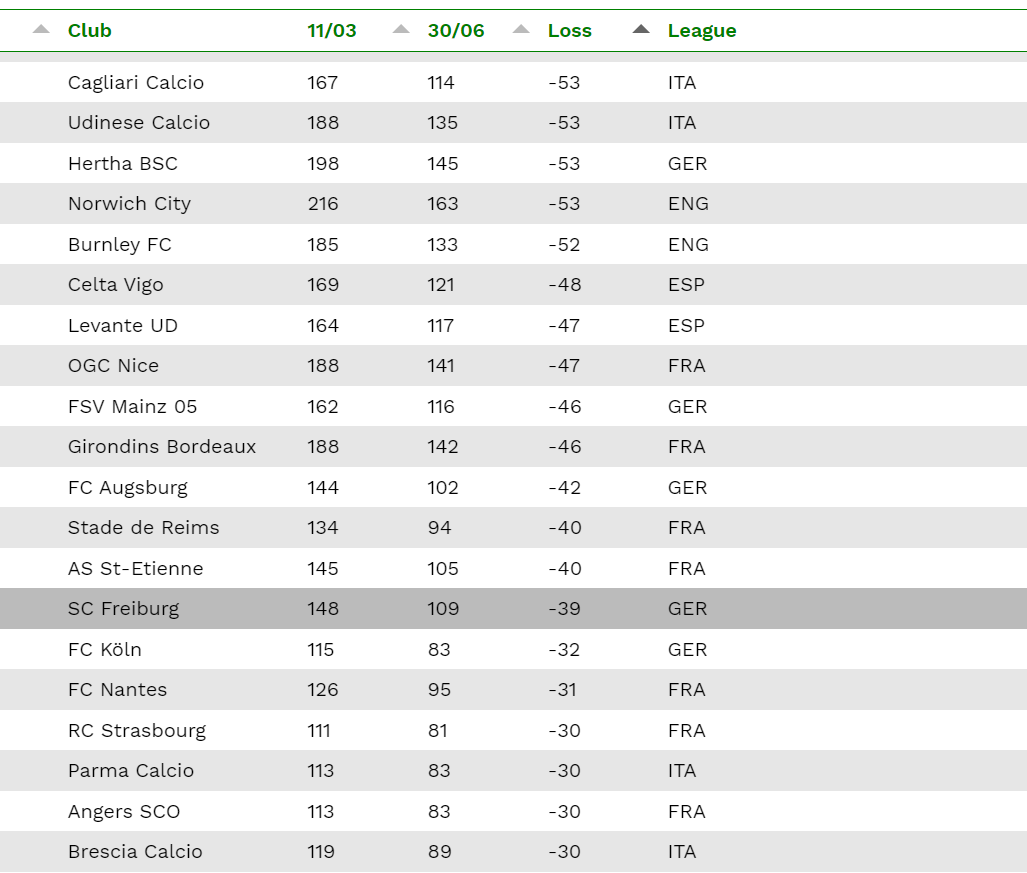 Note: The list has been compiled based on 20 players with the highest values per club (€ Million), if no matches played and no contract extension.

While the amounts for the likes of Man United, Chelsea and Barcelona might look a lot but in reality, these teams have the financial reinforcement to sustain such loses and still keep functioning normally.

But there are many humbler teams across Europe which depend on player transfers to gather funds for a new season and they will suffer massively in case the remainder of the matches are not played out in the summer.

Read: Who’s the Premier League player of the season for the 2019-20 season?

Read: Here’s how the EPL captains are responding to the fight against the pandemic.

Read: Have Liverpool FC caused a spike in COVID-19 cases in their region?

Read: The Premier League have come up with another radical plan to finish the season.

Which Premier League matches are set to be played at neutral...