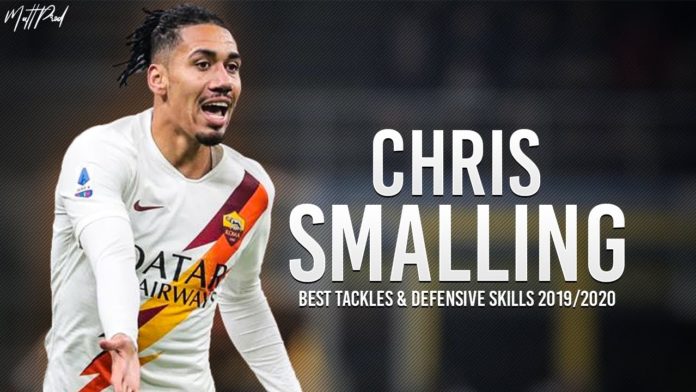 Arsenal have been linked with a move for Manchester United defender Chris Smalling at the end of the current season – as per reports.

But they are also keeping tabs on Liverpool centre-back Dejan Lovren who is set to move out of Anfield during the summer transfer window.

Chris Smalling is currently out on loan to Serie A side AS Roma but the defender will be coming back to England in the summer since the Italian side cannot afford to make him a permanent signing.

And once he comes back, Man United have no plans of holding onto him either since they already have a string of central defender which is why Arsenal now seem to be in pole position to sign the defender.

As per some reports, Chris Smalling will be available for a transfer price of around £32 million and this amount might be a bit too much for the Gunners especially since they also have the chance of signing Dejan Lovren.

Dejan Lovren has only one year left on his current deal at Liverpool meaning he will cost significantly less than Smalling who has two years left at Man United.

And so in such a scenario, Arsenal need to make a decision as to which player they should try and sign, Chris Smalling or Dejan Lovren.

Chris Smalling has been a regular starter for Roma this season having already played in 22 league games and he has really impressed a lot of people during his time in Italy.

Lovren, on the other hand, has played in only 9 Premier League matches for Liverpool so far and he is not exactly a leader in defence.

But all said and done since Arsenal look all set to miss out on the Champions League next season, it’s more than certain that Mikel Arteta will not have a massive transfer budget. And this could easily force the North London club to ditch their plans of signing Chris Smalling and bring Dejan Lovren on board.

Arsenal seem to have suffered a massive setback in signing both Dejan Lovren and Chris Smalling due to AS Roma.

Both Roma and Smalling have agreed on a permanent deal and the defender is also ready to take a pay cut but it seems Manchester United will be quoting £32 million for the defender which will be out of reach for the Italian side.

And hence some rumours are suggesting that Roma have now shifted their focus to Liverpool’s Dejan Lovren.

So if this report holds true and Dejan Lovren is indeed a transfer target for the Serie A side then the Gunners will have no other option but to shell out a large sum of money for the transfer of Chris Smalling which will only be possible if the North London club can sell off some existing deadwood in the summer.

But if they fail to do that they there’s a massive chance that Arteta will lose out on both Lovren as well as Smalling.

Earlier it was being reported that AS Roma are planning to back out of from the Chris Smalling transfer due to the high transfer price meaning Arsenal could have tried to sign him in the summer.

But now it looks like deal is very much on the table with Roma’s manager hinting that he wants Chris Smalling to remain at the club beyond the summer.

Fonseca told A Bola, as quoted:  “He surprised me.

“He’s a defender that had never left England and he arrived in a league very demanding of tactics, where details make the difference.

“Chris adapted very quickly. He’s an extraordinary guy, very intelligent. He has characteristics that I really appreciate in the centre.

“He’s fast, nearly unbeatable in one-on-ones. He has a great ability to read the play and anticipate. He was very important for this club.

“If possible, I would like him to stay. He’s a great professional and person, it’s a pleasure to have him here with us.”

If Roma are seriously thinking of splashing out the money in order to sign Chris Smalling in the summer then it’s really bad news for Mikel Arteta since the Manchester United man would have been the perfect addition to his defence alongside David Luiz.

Also if the Serie A side are actually interested then Man United would rather sell the defender to an Italian side instead of a domestic rival.

Read: England international explains why the 19-20 season should be scrapped.

Read: UEFA sends out yet another dampening message to all the European clubs.

Read: Premier League restart plans get a tentative green light from the government.

Will Frank Lampard back out from signing this full-back for next season?

Man United put on high alert regarding the signing of this...