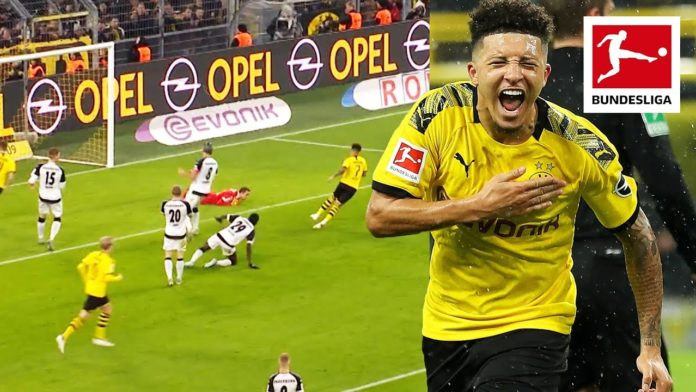 Jadon Sancho will remain at Borussia Dortmund until 2022 as per the terms of his current deal but German football reporter Kevin Hatchard feels the youngster could be moving back to England for the upcoming season.

Both Manchester United as well as Chelsea have been heavily linked with the winger and some rumours claim Jadon Sancho will choose the Blues given that he is a boyhood Chelsea fan. And also for the fact that he played his youth level football for Manchester City.

As per Hatchard, while Sancho will want to move back to the Premier League during the summer but the interested clubs will have to break the bank in order to bring him onboard.

“He’s an absolute stone-cold superstar,” he told The Sports Bar. “You look just before Christmas, he was turning up late to things and he was sanctioned by the club numerous times for not behaving the way they would want.

“He could have sulked, pushed for a move, basically thrown his toys out of the pram – but he didn’t do that at all.

“I think he will leave Dortmund at the end of the season, that’s been the perceived wisdom for quite some time.

“Even though he enjoys playing alongside Marco Reus, and Erling Braut Haaland has gone there and they’ve struck up a relationship already – they seem to get on pretty well on and off the pitch – I do think he’ll move.

“The finances for Dortmund make sense; we’ve seen them do that with Ousmane Dembele, they will sell players on if they get the right price for them

“The Premier League is a possibility and I think Chelsea would be interested and he’s got a soft spot for them.

“Personally I think if somebody bid in the region of €140m, I think that’s a fair price.

“If you look at what players go for now, and at the fact, Dortmund agreed a new contract with him and that several clubs will go for him, I don’t think €140m is unreasonable.”

If €140million (£118m) is the price for which Jadon Sancho is eventually sold then he will be the fourth most expensive player in history after Neymar, Kylian Mbappe and Philippe Coutinho.

Read: Chelsea eyeing a move for this 22 Y/O American to solve their defensive crisis.

Read: Chelsea man reveals why the winter break has come at the perfect time.

Read: Man United receive a double injury setback before their clash against Chelsea.

Virgil Van Dijk to Chelsea is now a realistic possibility

How Ole could alter Man United’s attacking formation against Chelsea next...

Make or Break player of the week: Willian