Arsenal take on Newcastle United in the Premier League and this match could be really important for the Gunners in the larger scheme of things.

The North London club have now drawn their last four league matches which means they are still sitting on the 10th position on the league table.

While Arsenal have played some really good football under new manager Mikel Arteta, it’s high time that they start picking up wins as well or else they will keep moving further behind from that elusive Champions League spot.

Arteta has a handful of injuries to deal with and most of them are in the backline so going into this match, the Spanish boss will surely be a bit tensed regarding his team’s defensive capabilities.

January signing Cedric Soares is out with an injury while Calum Chambers too is sidelined meaning David Luiz and Sokratis should once again start in central defence.

While the manager could also use Pablo Mari but we don’t think the new arrival will be thrown into the thick of things so early.

Kieran Tierney is out with a dislocated shoulder while young Bukayo Saka is also an injury doubt.

Sead Kolasinac is also recovering from an injury but reports claim the Bosnian should be fully fit for this weekend’s clash against Newcastle United.

Granit Xhaka was partnered by Matteo Guendozi in central midfield during Arsenal’s previous league game against Burnley and we feel the manager will stick with the same pairing this weekend as well.

Mesut Ozil has played a lot of football ever since Mikel Arteta has taken charge of Arsenal and the German should once again get a start vs the Magpies. But this would also mean that Danny Ceballos also missed out.

Gabriel Martinelli has really impressed everyone with his performances over the past couple of weeks and the youngster could once again be handed a start by the Arsenal manager.

Possibly the Brazilian will play on the right flank while Aubameyang occupies the left flank meaning Nicolas Pepe will once again start the match on the bench.

Read: Pundit wants the Gunners to let this star player leave on a free transfer.

Read: David Luiz explains the reasons why this man will be a success at the Emirates. 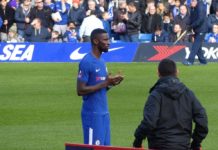 Chelsea defender explains how he lost to the Tottenham fans: All in the head?

Has Mikel Arteta been able to chance this under-performing star under his guidance?

Arsenal legend predicts the league position for the Gunners at the...

Has Mikel Arteta been able to chance this under-performing star under...

Here’s two things Arsenal need to do in order to pick...

Here’s why ‘this’ Arsenal misfit will not be joining Manchester United...

Chelsea to step up chase for this Arsenal player: Can Conte...