The pundit wrote for Sky Sports: “Liverpool have had a break and they will be fresh but sometimes it can be a hindrance rather than a positive. I think Norwich are gone if I am honest with you.

“They have to go after a win and it opens it up for Liverpool to pick them off.

“They have been back in training but just bubbling under the surface of the feeling that they are so-called Premier League champions.

“They do not have to play well to win, and this will be another comfortable afternoon for Liverpool.”

OUR VERDICT – Norwich vs Liverpool:

Liverpool currently have a 22-point lead at the top of the table and there’s a very little chance that they will be dropping points this weekend.

But having said that, we have a hunch that the Reds could finally taste defeat in the Premier League.

Well, this might be a long-shot but this weekend’s game has all the recipe of a Liverpool defeat. Firstly, Jurgen Klopp’s men will be returning from the winter break meaning they could need time to settle down. And also the fact that they will be playing away from home could be another factor leading to their downfall.

Read: Does this manager deserve to beat Jurgen Klopp to the Manager of the Year award?

Read: Klopp interested in signing this 20 Y/O Serie A defender. 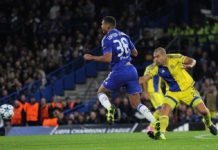 ‘This’ 23 Y/O midfielder could be available for free during the...