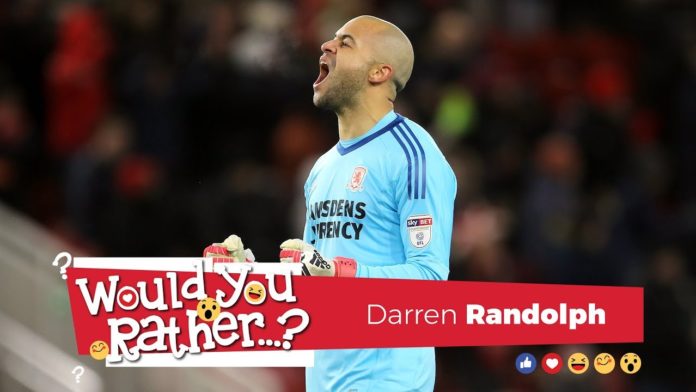 Lukasz Fabianski remains sidelined with a thigh injury and David Moyes is eager to bolster his squad by bringing in the 32-year-old keeper.

And as per the latest reports, the Hammers have already agreed on a fee to sign Darren Randolph this month but it looks like the board are hesitant to go ahead with the transfer.

As per reports, the keeper has struggled with a thigh problem in recent weeks and medical tests have revealed that he is yet to fully recover.

Now the Hammers have a really bad history of signing injured players and then wasting their money as well as time on making them fully fit.

And this is why it looks like the board are having second thoughts about whether they should sign Darren Randolph or should they continue with their current pair.

Randolph is no stranger to West Ham since he spent two years at the club after having joined the Hammers back in 2015 as a free agent.

He only moved out of the club back in the summer of 2017 going on to join Middlesbrough – a club where he’s been since then.

West Ham have put Darren Randolph’s move on hold so they can assess his hip injury further, though they hope the issue isn’t serious enough to stop the deal from going through. (@EveningStandard)

This season, Darren Randolph has played in 14 Championship games for Middlesbrough and has managed to keep only 2 clean sheets which is nowhere close to a good stats but given he will not be playing a first-team role, these numbers are good enough.

Now with a fee agreed upon what remains to be seen is whether the West Ham United hierarchy actually take the risk of bringing on the 32-year-old or wait it out until the end of the season.

It looks like the deal for Darren Randolph is not over yet as the Middlesbrough manager has come out to claim that the Hammers are putting the keeper through further tests in order to determine his fitness and if everything goes well then he could still join the London Stadium this week.

“He’s still having the longest medical in history,” Woodgate said.

“He’ll have another scan and we’ll know more in the next 24 hours.

“I’ll get on with it, Darren’s a top pro, absolutely top class pro and if he goes to West Ham good luck and I wish him all the best. If he stays here, he’ll be fantastic.”

Mikel Arteta gives an update on his star player’s rumoured exit this month: Is he leaving?

Gerrard reveals the warning Jurgen Klopp gave him a couple of years ago: What was it?

Gerrard reveals the warning Jurgen Klopp gave him a couple of...

West Ham receive some great news amidst the 2-1 defeat at...