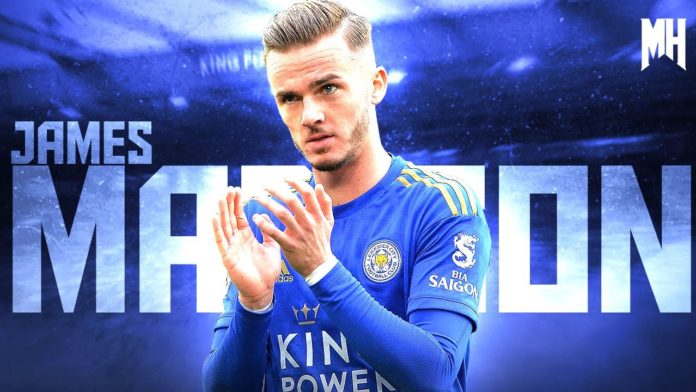 Arsenal are keen to battle Manchester United to the signing of Leicester City playmaker James Maddison – as per reports.

Brendan Rodgers has very categorically said that James Maddison will remain at the King Power until the end of the season and even most pundits believe that it will be a waste for him to leave such a fine performing Leicester side during the middle of the season.

“James is a very talented player, a wonderful player, and he will be here in January and beyond,” Rodgers said.

“There’s lots of speculation around lots of our players, which is great, because they’re talents and it means they and the team are doing very well.

“There’s no pressure to sell here and there’s no need for us to sell.

“Nobody will leave here in January that’s for sure – we want to add to the squad if we can.”

But despite the warning ushered by the Foxes manager, Man United have been heavily linked with the 23-year-old and as per reports the Old Trafford outfit have made him their No 1 transfer target for the current transfer window.

There’s no pressure on Leicester to sell James Maddison right now but United believe that the right amount can always pursue them to offload their star player no matter what the scenario.

Now though Man United might have to face some stiff competition since Mikel Arteta is eager to try and sign the Coventry born lad.

It’s still unclear as to how serious the Arsenal manager really is but their entry into the transfer race will surely make things a lot more interesting since Leicester can now easily jack up the price of James Maddison.

Having said that though, Arsenal might not be able to run the race too far for two major reasons.

Firstly they have spent heavily during the summer transfer window meaning Arteta will surely not be given a massive transfer budget during the middle of the season.

And most importantly, whatever money he gets, the Gunners boss would want to use that to bring in defensive reinforcements instead of making his attacking department overloaded.

Read: Leicester seem to have found a replacement for Ben Chilwell.

Chelsea receive a triple injury setback before their clash vs Manchester...

Lampard hints at a major selection decision for Chelsea vs Man...

Chelsea manager reflects on their make or break phase in the...

Lampard explains his long-term plans before his side take on Man...

Can Chelsea manage to pick up all three points vs Manchester...

Chelsea willing to let go of defender but not to Arsenal:...

CRAZY MARKETS: Here’s the list of the clubs which are incurring...