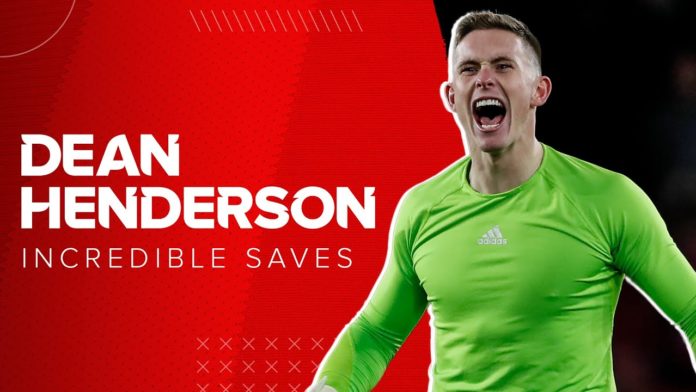 Chelsea are reportedly eyeing a move for Manchester United goalkeeper Dean Henderson during the summer transfer window – as per reports.

The keeper has come up through the ranks at Manchester United and during the summer, he was sent out on loan to Sheffield United

So far the shot-stopper has played in 27 Premier League games this season and has managed to keep 10 clean sheets which seem to have caught the eye of Chelsea manager Frank Lampard.

Dean Henderson is out of contract at Manchester United in 2022 and the Red Devils are trying to make him agree to a new deal at the club and right now they are hopeful the youngster will commit his future to the club.

But that will only depend on whether Solskjaer is willing to hand him the No 1 spot for next season otherwise there’s a chance that Dean Henderson might look to move out.

And amongst this, there are reports which are claiming that Chelsea are willing to pay £50m for his services next season.

Frank Lampard has been having real problems with Kepa this season and there’s a massive chance that the Spaniard could be sold off in the summer paving the way for Dean Henderson to arrive at the club.

But while signing the 23-year-old seems to be a big move forward for Chelsea, it will be really hard for them to convince Manchester United to agree to sell such a fine talent to one of their biggest rivals.

And this is why it seems like Man United will try and hold onto Henderson by sending him out on loan to Sheffield United once again next season and during this time they will try and sort out the future of David De Gea.

De Gea is certainly not the player he once was and this season he has made some really poor errors infront of goal. But surely the Spaniard’s career at OT is not over yet and it will take United some more time to offload him and during this period, the club will do all they can to hold onto Henderson.

Hence while Chelsea will surely test the waters in the summer but there’s very little chance that Solskjaer will let Dean Henderson join the Stamford Bridge outfit.

Chelsea have been dealt with a severe blow in signing Henderson during the summer since The Mirror are now claiming that Manchester United are willing to offer the keeper a massive upgrade in his new deal.

It’s no secret that United have been in talks with Henderson’s representatives for months now over a new offer and as per the report, the club is now willing to hand him a staggering £100,000-a-week deal in order to ward off interest from Chelsea in the summer.

While Chelsea will not lose hope over this new proposal but it seems like Man United are confident that Dean Henderson will agree to the terms of a new deal since the player has been assured that he has a long-term future at Old Trafford.

Read: Here’s why Chelsea might find it really hard to sign this £85m winger in the summer.

Read: This 24 Y/O forward could snub Liverpool and chose to join Chelsea.

Read: Looks like the most sought after teenager will finally be up for sale this summer.

Which Premier League side is likely to land this Serie A winger in the summer?

Can Liverpool really sign this Man United transfer target or are they running a failed race?

This Rangers man might seek to join a PL club courtesy Van Dijk: Which one?

Celtic might be able to sell this player for as much...