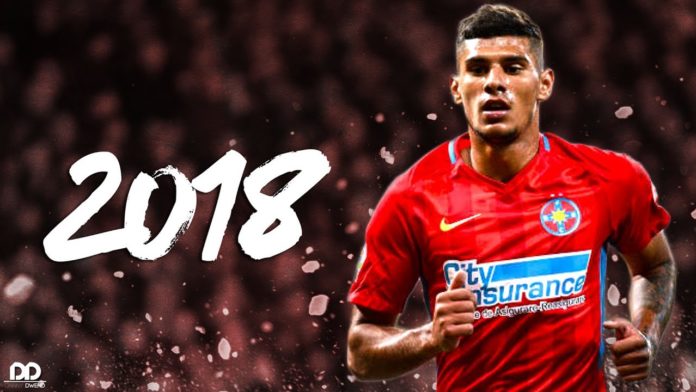 Florinel Coman joined FCSB in 2017 and this season, the winger has already caught the attention of a number of big clubs in Europe.

So far during the 2019-20 season, the player has featured in 22 Liga 1 games for his club and has managed to find the back of the net a monstrous 11 times, along with nine assists.

And as per reports, West Ham have sent scouts to watch Florinel Coman in action on Sunday.

As per TransferMarkt, the winger is currently valued at €5.5 million which would make the 21-year-old a really good buy especially with the number of goals he’s scored this season.

But recently FCSB outspoken owner Gigi Becali had made it clear that he will not let Florinel Coman leave for anything less than 17 million pounds.

While comparing the youngster to Kylian Mbappe Hagi had also told a news conference: “My Coman, born in ’98, is rated very weak. Two-three million, and when you see others at 18 years it cost 80 million (Mbappe).

“Only one is French and the other is Romanian. Before, the Romanian had the quota. He was there, almost. Me with Maradona, for example. It was not such a big difference in the quota.

“It will cost us a lot to gain this respect from those outside,”

17 million pounds is surely a steep price tag for this relatively unknown player but David Moyes will be itching to bring in reinforcements for the upcoming season and it seems like the winger could add a new spark of life at West Ham United.

Click here for all the other Premier League news.

Arsenal could face a tough challenge in signing this £30m winger: Why?

This Man United is not likely to move out of Old Trafford in the summer: Here’s why

This Man United is not likely to move out of Old...

Do Arsenal really need to sign this La Liga misfit in...

NAIL ON THE HEAD: CEO of a top PL club predicts...