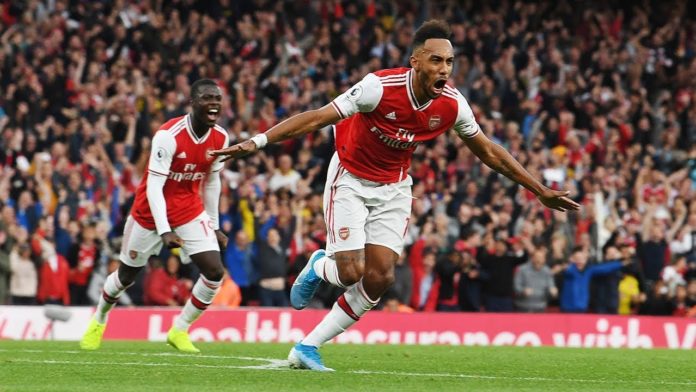 Arsenal forward Aubameyang has been heavily linked with a move to Manchester United at the end of the season but according to Paul Merson, the player will join the OT outfit primarily for one major reason.

Writing for Sky Sports, the former Gunners man has claimed that if Aubameyang was to join the Red Devils in the summer then he will be moving because he wants a fatter wage bill and not because he wants to win trophies.

He wrote: “I don’t think you can say Aubameyang would be going for ambition if he went to Manchester United though. He’d be going for the money because he’s almost 31 and this would likely to be his last move.

“At the moment, you can’t say you are going to go to Manchester United and get guaranteed trophies. You won’t be able to guarantee United winning anything in the next two or three seasons. They are getting better but it’s not ambitions, it’s the money.

“If it was Manchester City or Liverpool, that would be different. You’d be thinking of course, he’s ambitious and he wants to win things. I’m not saying United won’t win things, but you can’t assure me of it. I can assure you Man City or Liverpool will in the next few years.”

But at the same time, Merson also admitted that Arsenal will have a tough call to make on whether they want their top scorer to head out or cave in to award him a significant pay rise.

He added: “It would be a major disaster for Arsenal if they lost Aubameyang, however, the decision will be weighed up and at least it will be the club’s decision as to what they do.

“Do they give him £300,000-a-week? I’ve always said they will have a problem until Mesut Ozil leaves the club. Every day he’s there, every other top player will want what he’s on. It’s a huge problem and not a new one.

“Arsenal may also weigh it up asking if they will win the Premier League or get into the top four in the next few years if they pay Aubameyang £300,000-a-week. They haven’t actually done it yet with him there, so they may look at it and say it is good business to let him go.

“There’s also the danger of giving him big money, just like they did with Ozil, and then every other player wanting the same. It would take you straight back to the Ozil scenario and if you do spend all that money on him and you don’t get into the top four it’s not money well spent.

“It’s a really hard decision and it will all come down to how the club weigh it up.”

Is Aubameyang moving out for money?

While Manchester United are still one of the biggest names in the world but we can’t help but agree with Merson on this one.

Yes, the Red Devils are moving in the right direction under Ole Gunnar Solskjaer but it will still take a couple of more seasons before they can really challenge for the Premier League title.

So obviously, if Aubameyang was to join Man United this summer then surely it won’t be for the trophies since, by the time the Red Devils are a force to reckon with, the Gabon international might very well have to hang up his boost.

But on the other hand, the forward is reportedly demanding £300,000-a-week in the form of wages which Arsenal are not willing to pay at this moment and there are claims that if the player is willing to move out then Manchester United will be ready to offer him his desired wages.

Read: This Arsenal man could be the final piece in Man United’s jigsaw puzzle.

Read: After Man United another top European club joins the race to sign this Arsenal star.

Read: The Premier League has a new return date after failing the first deadline.

Celtic & Rangers interested in signing this 24 Y/O midfielder: Where’s he headed to?

Did this Liverpool man just hint at a summer exit? Good news for Arsenal