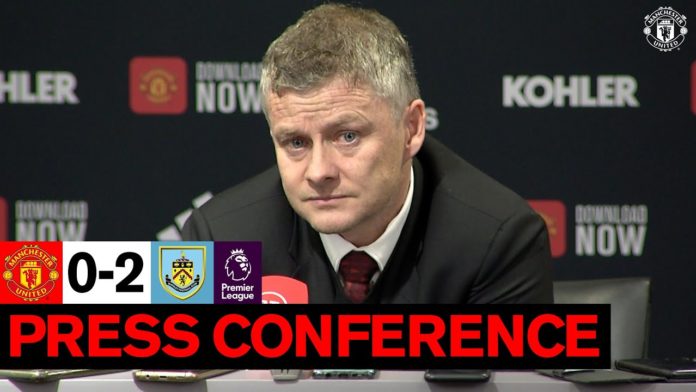 The Manchester United stadium was half-empty by the time the final whistle blew during their 2-0 loss to Burnley on Wednesday and after this Ole Gunnar Solskjaer is under tremendous pressure.

The Norwegian has been struggling to put his plans to action this season but even after a home loss to Burnley, Ole Gunnar Solskjaer chose to keep a brave face and focus on their next match.

The manager said after the match as quoted by Manutd.com: “We hold our hands up and tonight wasn’t good enough, but they always support the team and I’ve felt that support ever since I’ve played here. It’s important that we do in difficult times.

“We’re all disappointed. The players after disappointed, the club’s disappointed, but what else can we do than come in tomorrow and know that we’re wearing a Man United shirt and work to improve again? [On] Sunday [we have another game] in the FA Cup – it’s relentless.

“We’re looking to improve, yeah, definitely. We know as well we’ve got our targets and days like this highlight more how well some of them have done so far in the season.

“Some of the results and performances we’ve had have been fantastic. Today, that’s the second defeat at home, the first since August, and I’d thought we’d turned that corner winning games like this, but we haven’t clearly and we will keep chipping away.”

But after this loss in the Premier League, there has been a huge buzz that Ole Gunnar Solskjaer could be shown the door by the hierarchy and the club are possibly looking at Mauricio Pochettino to replace the Norwegian.

Some pundits have also chosen to speak out about the inability of Ole to mingle with the big names in management and feel Manchester United should bring in someone with experience and character.

Having said this though, Sky Sports are claiming that the management is standing firmly beside their current boss and right now they have no plans of sacking him despite a string of losses.

The report states: “Manchester United have no plans to sack Ole Gunnar Solskjaer, despite their manager overseeing the club’s worst points tally after 24 games in over 30 years.

“United’s hierarchy are not even considering a managerial change, following the club’s fourth defeat in 2020.

The club’s board and players remain fully behind Solskjaer, despite him helping accumulate the club’s worst points tally after 24 games since the 1988-89 season.”

Read: Man United eye this Villa and West Ham transfer target as a replacement to Rashford.

Will the Premier League’s new method of ending the 19-20 season cause problems for UK’s healthcare?

Chelsea move one step closer to signing the replacement to Kepa...

Will the Premier League’s new method of ending the 19-20 season...

Clash of the English Giants.