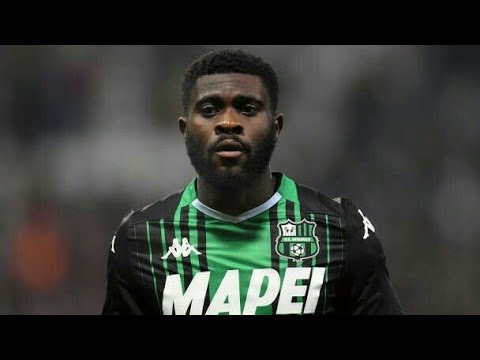 As per reports, Chelsea are looking to bring back winger Jeremie Boga from Sassuolo in the summer.

Jeremie Boga is a product of the Chelsea academy but like many other players, he too failed to break into the senior side and was eventually sold off by the Blues to Sassuolo in the summer of 2018.

This season the winger has been in great form for the Italian side having already scored eight goals and providing four assists in just 24 league games and it seems like he could return back to the Premier League for the upcoming season.

The player was sold to Sassuolo for a fee of just £2.5 million but the Blues did include a buy-back clause of £12.8 million which they are planning to trigger this summer.

Jeremie Boga had recently claimed that he left Chelsea because he wanted to play regular football and during him time at the Bridge, the Blues had a number of good strikers.

He told The Athletic: “When I was there, it was Willian, [Eden] Hazard, Pedro. When Jose Mourinho was there, it was [Mohamed] Salah. There were a lot of good wingers. For me, it has always been if I can’t play, then I will try to go on loan or try to go somewhere to improve, then maybe come back one day.”

And many fear that if Jeremie Boga was to return back to Chelsea, he might once again face a similar dilemma.

Right now, the Blues have a series of top-class wingers in the form of Pulisic, Hudson-Odoi and even Mason Mount meaning Boga will once again have to fight for his place in case he returns back to England.

And we are not sure if the 23-year-old will want to do that especially after having such a fine season for his current season.

Also above everything, Chelsea manager Frank Lampard has been working with youngsters all throughout this season and there’s a big chance that the manager might go after big stars this summer since he has not been able to sign any new players over the past two transfer windows.

So even if the Blues did trigger the buyback clause and bring back Jeremie Boga, the winger might very well be way down the pecking order – at least for the next season.

Read: Jose Mourinho could play a key role in signing this Chelsea player for Spurs.

Read: Man City join Chelsea in the race to sign this Juventus midfielder.

Read: Here’s why this ex-EPL star should not join Chelsea in the summer.

Lampard praises two players after Chelsea beat Crystal Palace: Who are they?

Solskjaer sends out a clear warning to his players before they...

Arsenal player sends out a stern warning despite a fine display...

Solskjaer sends out a clear warning to his players before they...

Arsenal player sends out a stern warning despite a fine display...

Here’s why this Man United man is not likely to leave...

Chelsea player heavily criticised despite a fine display vs Palace: Why...