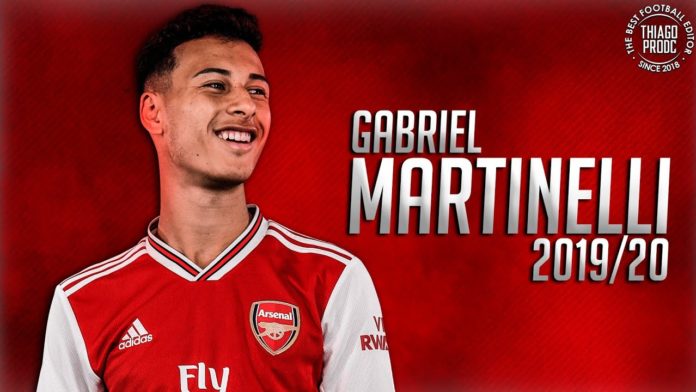 Arsenal youngster Gabriel Martinelli has stepped up in the absence of Aubameyang during the past couple of weeks but it looks like the good outings have also caught the attention of Liverpool – as per reports.

The Gunners brought in Gabriel Martinelli from Brazilian side Ituano during the summer transfer window and in his first-ever season in England, the teenager has grown in leaps and bounds.

So far, the 18-year-old has played in 21 games across all competitions and has managed to score 10 goals in these matches which is a staggering feat considering this is his first season in a foreign land.

According to Football Insider, the Liverpool recruitment team have set their sights on Gabriel Martinelli and will be keeping tabs on the player for the rest of the season.

The report states: “A Liverpool source has told Football Insider that their recruitment team, led by director of football Michael Edwards, are on the trail of Martinelli after his startling progress in his debut English campaign.”

Martinelli is under contract at Arsenal until the summer of 2024 meaning the Gunners have no real reason to panic.

But right now, Liverpool are one of the best teams in Europe and not many players will reject the offer of playing under the guidance of Jurgen Klopp.

Also, Gabriel Martinelli is far from being a regular starter for the Emirates outfit and as long as Lacezette and Aubameyang are playing together we don’t think Arteta will risk pushing the youngster up the pecking order.

So with him scoring goals at regular intervals, there’s every chance that Gabriel Martinelli could try and push out of Arsenal in search of regular starts.

Liverpool though will not solve too many of the player’s problems since they too have a set front-three so even if Gabriel Martinelli chooses to join the Anfield outfit then too he will have to fight his way to the top – which under the current circumstances, is a more easier task at Arsenal.

In a major update, it looks like Liverpool aren’t the only club interested in signing Gabriel Martinelli since some rumours claim, Real Madrid too are eager to bag the services of the 18-year-old.

Interest from these two top European clubs means that Arsenal can no longer sit with folded hands which is why the club have chosen to offer him a new deal.

As per reports, Arsenal are willing to offer Gabriel Martinelli a new contract worth £30,000-a-week so that they can fend off interest from the likes of Liverpool and Real Madrid.

Read: Arsenal superstar agrees to move out of the Emirates.

Two PL clubs interested in signing this Chelsea midfielder: Will he move out?

Arsenal receive a major blow in the signing of this midfielder:...