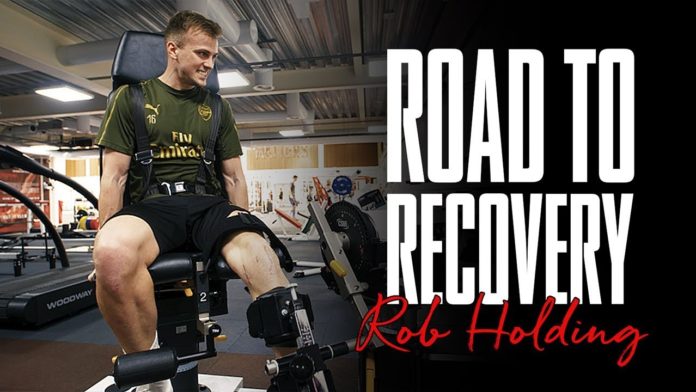 Arsenal take on AFC Bournemouth in the FA Cup on Monday and defender Rob Holding should be starting at centre-back for the Gunners.

Last season, Rob Holding was having a brilliant show of talent under Unai Emery but then in December of 2018, he went on to pick up a cruciate ligament injury which has kept him out of action for almost close to a year.

So far this season, he has played in only two Premier League matches for a total of just 86 minutes and has also played in the third round win vs Leeds United.

And with David Luiz suspended for the 4th Round clash, Rob Holding is once again scheduled to start in central defence, this time partnering Sokratis.

While the player has played very little football for the Gunners this season, Mikel Arteta feels the player has what it takes to succeed at the Emirates, it’s just that he needs to get back his rhythm.

“Obviously the fact he has been out for such a long time, he is lacking competition now and lacking that rhythm. We need to try to give him as much as possible to help him.

“There were some moments that he looked really, really good. He is a player that is going to be very valuable for us.”

Sokratis will be returning back from an injury lay-off so it will be really important for Rob Holding to maintain his focus and at the same time command the defensive line or else the Cherries could very well cause an upset.

Read: Arsenal player wants to leave the club this month.

Chelsea look all set to miss out on this World Cup winner in the summer: Here’s why

Will Arsenal really make their next big signing based on this 22 Y/O’s judgement?

Chelsea look all set to miss out on this World Cup...

Will Arsenal really make their next big signing based on this...

Arsenal & Chelsea receive a major setback in signing this centre-back:...

Can this Man United misfit really revive his career at OT...

How Real Madrid’s pursuit of Kylian Mbappe has set in motion...

“They are spoilt children,”: Former Swedish international absolutely tears down the...