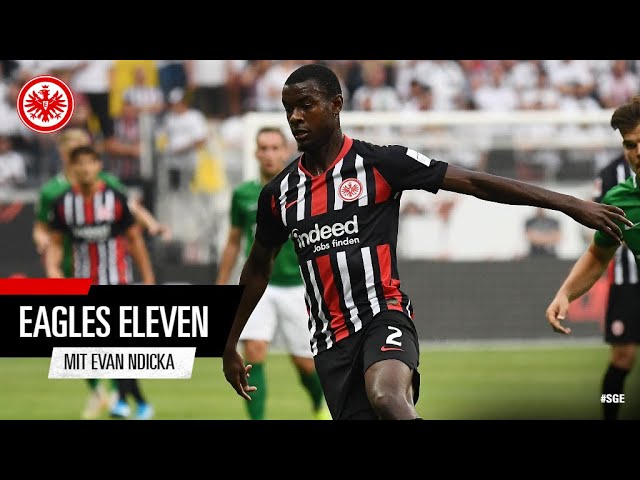 Evan N’Dicka is a product of the academy of French club AJ Auxerre having joined Eintracht in 2018. And during these past two seasons, the player has really impressed in the centre-back role – occasionally playing as a left-back.

This season the young defender has played in 25 games for Eintracht across all competitions and as per reports, the Gunners are planning to make a move for him at the end of the season.

Arsenal are looking to overhaul their backline for the upcoming season and there’s a big chance that players like Mustafi, Sokratis and Rob Holding could be sold off during the summer transfer window.

The manager has brought in players Pablo Mari and Cedric Soares during the January transfer window while William Saliba will also be arriving during the summer.

So in such a scenario is the manager really serious about signing Evan N’Dicka?

Evan N’Dicka is currently valued at 25 million euros which is a very good price point for a player who is just 20 years old. But at the same time, there are fears that Unai Emery should not be using his transfer budget in order to bring in young defenders.

As of now, it seems like Arsenal will once again be playing in the Europa League next season meaning the manager will be needing experienced players if he is serious about getting back into the Champions League soon enough.

Another major roadblock for Arsenal is the fact that Liverpool are also interested in signing Evan N’Dicka in the summer and might challenge the Gunners in the signing of the centre-back.

Dejan Lovren is expected to leave Liverpool in the summer and as per some experts, Jurgen Klopp is looking to bring in N’Dicka as a backup to the likes of Van Dijk and Joe Gomez.

Also, the youngster is under contract with Eintracht till the summer of 2023 meaning the Bundesliga side are under no pressure to sell him off in the summer.

So if both Liverpool and Arsenal come calling for the defender then Frankfurt will surely not shy away from jacking up the asking for their centre-back. And in such a scenario when Liverpool will not feel the pressure but for a team like Arsenal, this might be a big cause of concern since they are expected to work on a limited transfer budget in the summer.

Yes, Arsenal are badly in need of defensive reinforcements in the summer but it looks like it will be Liverpool who might get their hands on Evan N’Dicka.

It’s being claimed that Liverpool are serious about signing the youngster at the end of the season and they are now willing to offer the services of Dejan Lovren as part of a swap deal.

Dejan Lovren is out of contract at Liverpool next year and there’s a big chance that the 30-year-old could be on his way out this summer. And as per rumours, Jurgen Klopp is willing to send the defender to Eintracht Frankfurt in exchange of Evan N’Dicka.

We still don’t know just how true this report is but if this is eventually the case then it’s really bad news for Arsenal since they do not have any player to offer to the German side.

Read: Real Madrid seem to have reignited their interest in this Arsenal forward.

Read: Arsenal could finally get their hands on this 22-year-old in the summer.

Read: Real Madrid do not want to sign this Arsenal superstar.

Read: Here’s how much Arsenal might have to pay for Lacazette’s alternative.

Why Arsenal are not likely to challenge for a top-four spot next season?

Celtic want this experienced PL keeper as an alternative to Forster:...