Arsenal did not play during the weekend because the North London Derby was postponed since the Gunners did not have enough players to name a competitive-enough match-day squad. This means the Gunners have been properly rested before their 2nd leg clash in the Carabao Cup semi-final.

Last week, Arsenal managed to hold Liverpool to a 0-0 draw despite losing Granit Xhaka to a red card and with so many players still injured, the North London side will have to do it all over again if they wish to face Chelsea in the final.

There have been rumours that the Arsenal vs Liverpool game could be postponed due to so many absentees in the Gunners camp but according to Goal, the game will go ahead as per the prescribed schedule.

It will be really hard for Mikel Arteta to name a side that can take on Liverpool and pinch a win but with no fresh COVID cases in the past 48 hours, the 2nd leg isn’t likely to be delayed. The Emirates outfit obviously go into this game as the underdogs but at least they will have the home crowd to back them up.

Arsenal have allowed Sead Kolasinac to join Marseille so Kieran Tierney will start on the left side of defence. Tomiyasu is still a doubt with an injury meaning Calum Chambers will probably start as the right-back.

With Granit Xhaka suspended and Thomas Partey and Elneny out on international duty, Mikel Arteta will have a nightmare choosing his midfield trio.

Thankfully, Martin Odegaard has tested negative for COVID so he is likely going to start as the attacking midfielder but choosing the defensive midfield duo will need some ingenuity.

Martin Odegaard has returned to training (as have others) ahead of Thursday night's semi-final.

As it stands, Arsenal are in no doubt that the Liverpool game will go ahead, even with Mari and Kolasinac set to leave.

Lokonga will definitely start and there’s a massive chance that defender Ben White will play in midfield while Rob Holding and Gabriel in central defence. This was supposed to be the arrangement for that cancelled North London Derby and Mikel Arteta will probably fall back to this plan on Thursday as well.

Since Odegaard is coming back into the side Alexandre Lacazette will move into the centre-forward’s role. Bukayo Saka picked up a knock last week but he’s expected to return to full fitness before Thursday’s game.

By the looks of it, Mikel Arteta just about has enough players to name his first XI but apart from that, the bench should be filled with a bunch of academy youngsters.

Nicolas Pepe and Aubameyang have gone for the Africa Cup of Nations while Emile Smith Rowe remains a doubt with a groin injury.

Arsenal predicted line up vs Liverpool: 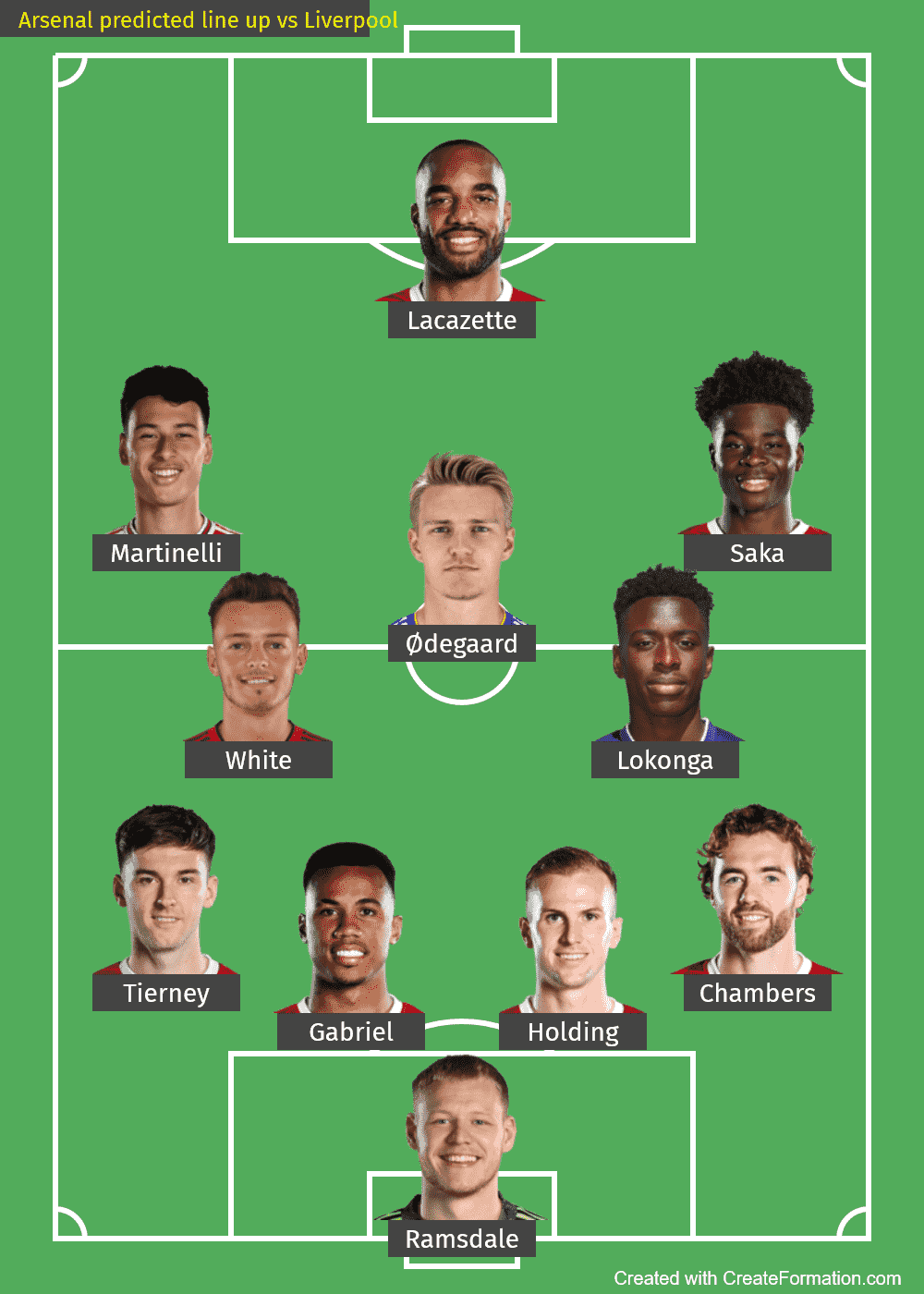 Read: Is the Arsenal vs Liverpool game set to be postponed?