Arsenal had been on a fine run of form in the previous few months but they came crashing back to the ground as Liverpool humbled them 4-0 last weekend.

The loss might be a big blow to the confidence which Mikel Arteta had amassed after a faulty start to the season but the Gunners are still sitting fifth on the Premier League table and this is a big thing as they enter the busy winter schedule.

Arsenal will be looking to bounce back to winning ways as they will face Newcastle United this weekend and since the Magpies have not won in their last 12 Premier League matches, this one should be an easy encounter for the Gunners. On the other hand, the North London side are undefeated in their previous five home league outings.

Arteta slightly altered his formation against Liverpool but he’s going to revert to the familiar 4-2-3-1 system on Saturday against Newcastle United. The manager though will love to rotate a few of his players but we don’t think he has the luxury to do that since Arsenal do not have too much quality on the bench.

A win for Arsenal could see them break into the top-four of the table but if they go onto lose then there’s an outside chance that they might end this matchweek in the ninth spot.

Nuno Tavares started at left-back ahead of Kieran Tierney in that Liverpool game but the youngster went on to make several errors during the game.

Tavares had so far justified his selection ahead of the Scottish international but after his poor show against Liverpool, Mikel Arteta is likely to push him back to the bench and recall Kieran Tierney into the starting line up.

Sead Kolasinac picked up an ankle injury while playing for Bosnia during the international break and the left-back is ruled out.

Tomiyasu is another player who had a really poor game last weekend and as per Fotmob, he got a rating of 4.7 out of 10(the worst of the bunch). But the Arsenal boss is going to keep his confidence on the summer signing primarily since he doesn’t have too much quality to fall back to.

The midfield area is a slight cause of concern for Mikel Arteta since Granit Xhaka is still out injured and the 4-0 loss showed that they are lacking creativity in the middle of the pitch.

With Xhaka nowhere close to full fitness, Thomas Partey is once again going to be partnered by Lokonga and this pair had not done enough against Liverpool. Having said that, these two have adequate talent to get past a team like Newcastle United.

Martin Odegaard has fallen down the pecking order in the previous few weeks with Arteta using Lacazette as the No 10. But this could change on Saturday as we expect the ex-Real Madrid man to come back into the side.

The accuracy from Martin Odegaard 🎯pic.twitter.com/63PANJst0K

Nicolas Pepe is not expected to get a start this weekend as Bukayo Saka and Emile Smith Rowe have more or less cemented their place as the two wide players. Aubameyang will obviously start up front and the manager also has young Gabriel Martinelli as a backup – if required. 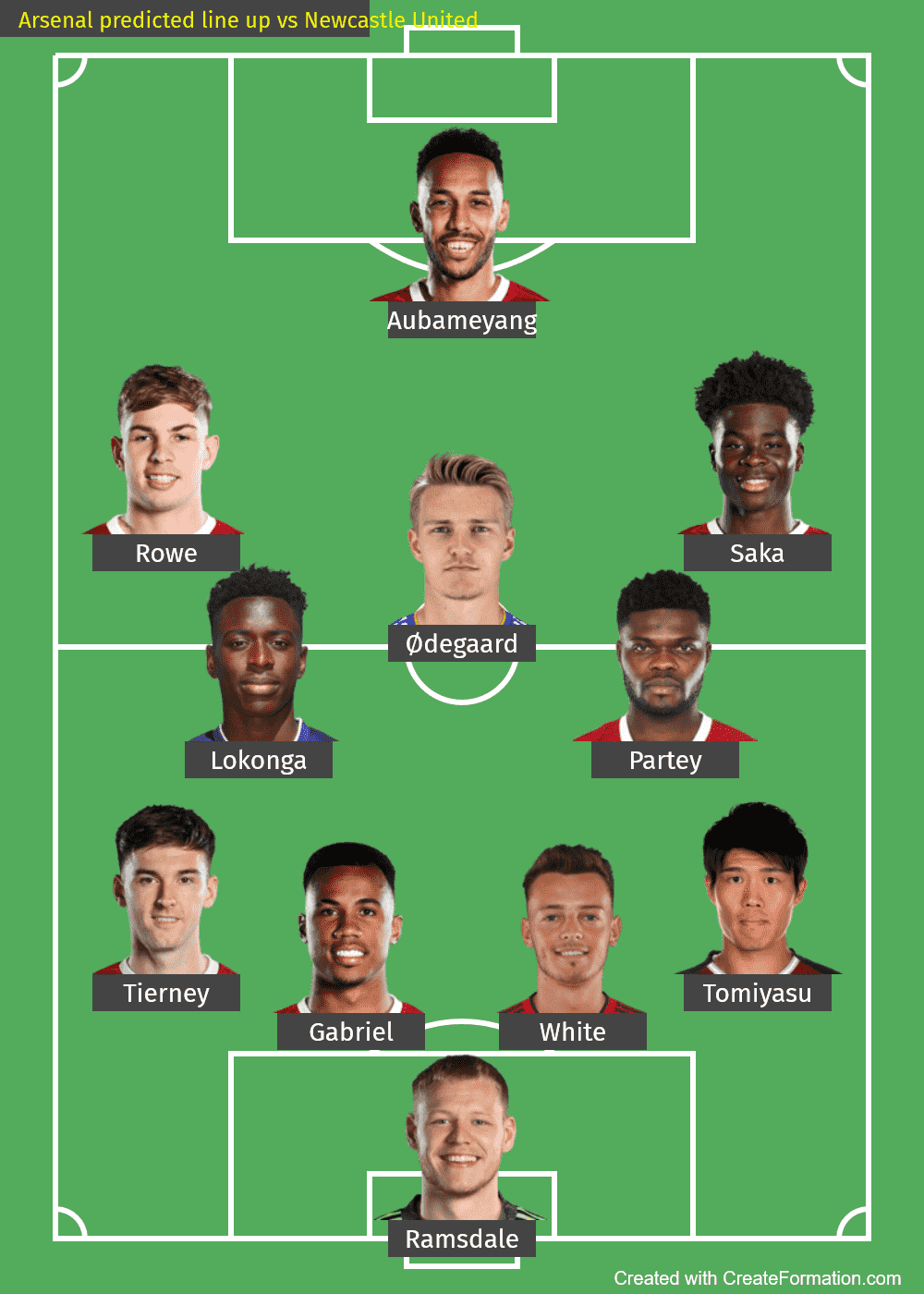 Read: Six Arsenal players who could leave during the January transfer window.