Arsenal were humbled by Liverpool in the Premier League last weekend but they will be hoping to get back to winning ways this weekend when they face Sheffield United.

The Blades have won just four games in the league this season and are currently the 20th side on the table. So the Gunners should be looking at nothing but all three points.

Arsenal were held to a 1-1 draw by Slavia Prague in midweek in the Europa League and this draw was another blow for their confidence as well as their hopes for qualifying for the Champions League next season.

Mikel Arteta’s side go into this match in the 10th spot on the league table so they have nearly no chance to finish in the top-four this season. And this might just prompt the manager to make a few rotations.

Arteta’s options in defence have become limited after David Luiz and Kieran Tierney were ruled out with an injury. Rob Holding and Gabriel played in central defence and the pair could start against Sheffield United as well.

The manager also has the option to use Pablo Mari at centre-back.

With Tierney out injured Soares will likely operate at left-back but Bellerin could be rested for this game meaning Callum Chambers will come into the side.

Granit Xhaka and Thomas Partey played vs Slavia Prague in midfield but given the form of Sheffield United this season, Thomas might be kept on the bench. Elneny is the most probable player to replace him.

Martin Odegaard wasn’t risked on Thursday due to a niggling knee injury and the Norwegian remains a doubt for the weekend’s game as well. Emile Smith Rowe has returned to full fitness and the youngster will start in midfield if Odegaard is not fully fit.

Lacazette had a very average game vs Slavia Prague on Thursday and it will not be a surprise if Arteta leaves him out of the starting XI on Sunday. Pierre-Emerick Aubameyang came off the bench in midweek but the Gabon international is likely to lead the line.

Bukayo Saka came back into the side and the youngster should be starting against Sheffield United as well.

Nicolas Pepe scored Arsenal’s only game against Slavia Prague and if Lacazette is not included in the line-up then Pepe will get a chance to start. 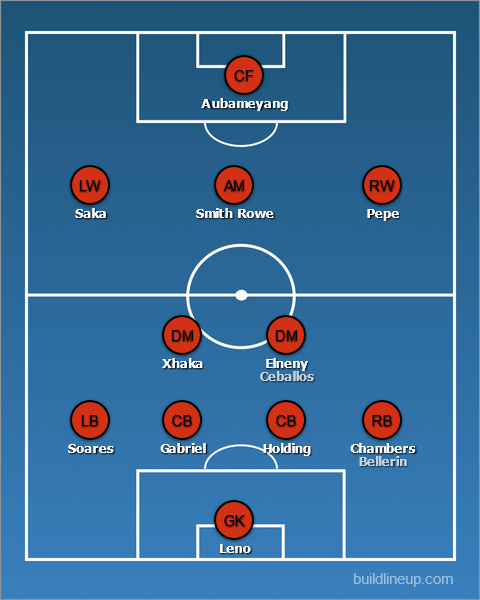