A 10-men Arsenal put up a stellar display against Liverpool in the 1st leg of the Carabao Cup semi-final and now they have another mountain to climb this weekend.

Arsenal take on Tottenham Hotspur in the North London Derby on Sunday and the outcome of this match could have a massive impact on the Premier League top-four race. The Gunners are currently fifth on the table, two points ahead of their London rivals but they have played two games more which is why it’s absolutely essential that they pick up all three points this weekend.

Mikel Arteta’s side worked their socks off in order to keep Liverpool at bay but that 0-0 result might have come at a massive cost since several key players could be ruled out of Sunday’s game due after that intense battle.

As things stand, Arsenal have 12 players on the sidelines and some of them will be touch and go for the North London Derby. With some important players already ruled out, there’s no doubt that the manager is going to opt for a change in formation and it will not be a surprise if Arteta chooses to deploy a side that just sits back and defends, looking to just play on the break.

Arsenal injuries and suspension vs Spurs:

The injuries have been constantly piling up for Mikel Arteta and on Thursday it was Cedric who picked up a hip injury and is likely to miss the North London Derby. Tomiyasu is already on the sidelines with a calf injury.

Interesting solution from Mikel Arteta during #Arsenal vs #Liverpool

– 3-3-3 with single width
– Narrow front three vacated wide areas and affected Liverpool's back 4
– Facilitated a defensive transition back into their 5-3-1 pic.twitter.com/LC0Exx45Kh

If either of the two right-backs is not fully fit then Calum Chambers will operate in that side of defence with Tierney playing on the other side.

Granit Xhaka picked up a red card for his tackle on Diogo Jota so he is suspended for Sunday’s game. And this is a major issue for the Arsenal boss since Thomas Partey and Elneny are not available due to the AFCON.

If this were not hardships enough then Odegaard is also ruled out with COVID while Emile Smith Rowe remains an injury doubt with a groin injury.

It’s an absolute crisis situation in terms of setting up his midfield so Mikel Arteta might have no other option but use someone like Rob Holding or Ben White in defensive midfield.

Bukayo Saka was also taken off on Thursday and speaking after the match, Mikel Arteta revealed that the youngster was not feeling well.

The manager told the press: “He felt something in the last minute. He was really fatigued and I don’t know. He’s a young boy and he recovers pretty quickly, he’s played a lot of minutes in the last months.”

Hopefully, Saka recovers in time since Nicolas Pepe is also out on international duty.

Thankfully, Lacazette, Nketiah and Gabriel Martinelli are fully fit and all of them will feature in the starting line up on Sunday.

Arsenal predicted line up vs Spurs: 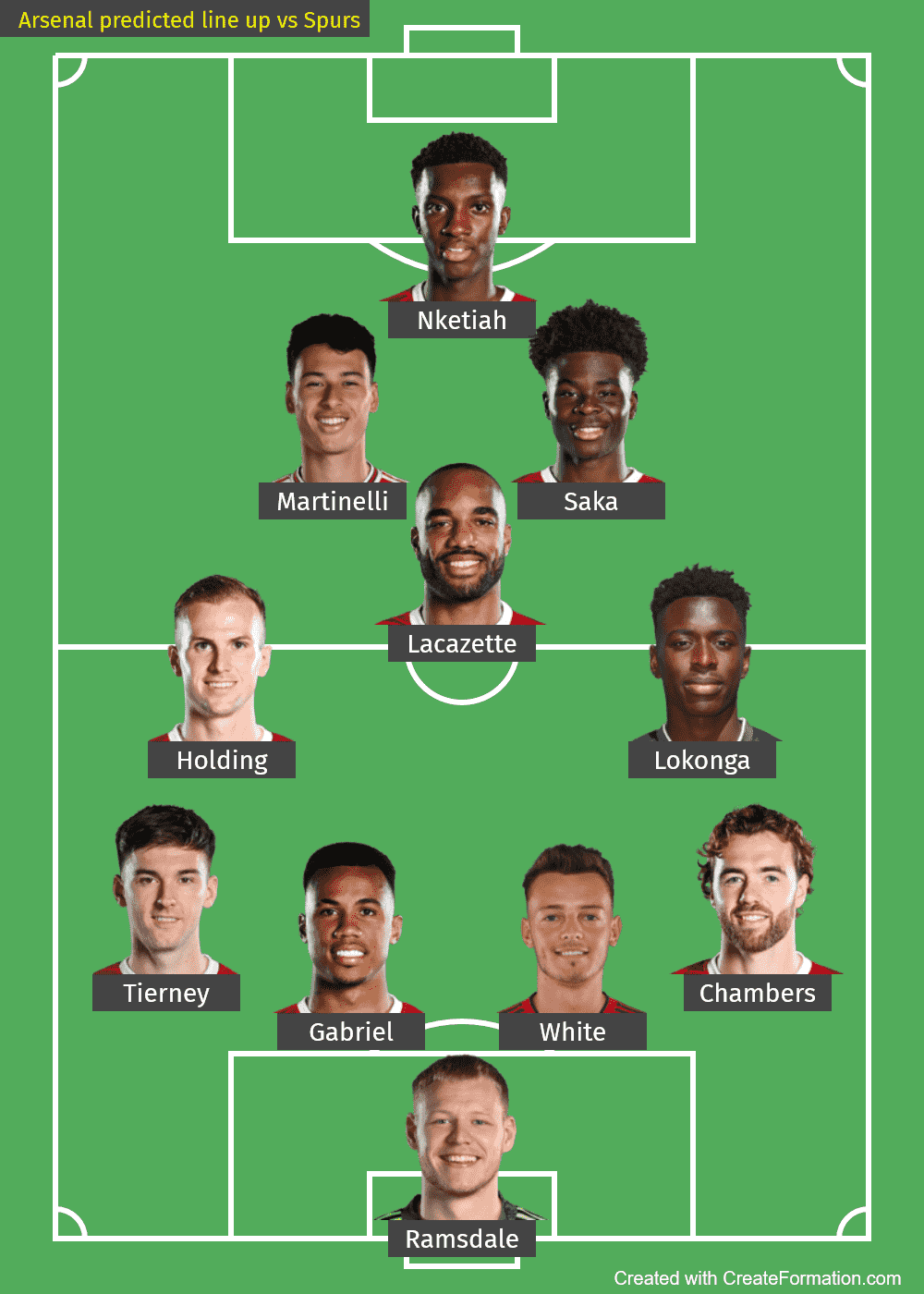 Read: The Gunners are set to go all out to try and sign this 21 Y/O forward.

Read: Are Arsenal set to beat West Ham United in the signing of this €20M midfielder?

Read: The Gunners have been urged to sign this ex-Liverpool superstar.