Arsenal managed to pick up a win against Chelsea last week in the Premier League but they had to really dig in deep to secure all three points.

The performance against Chelsea was really average as the Gunners opted to park the bus for most of the match and many people thought Arsenal had actually taken the pitch with a minnows mentality.

The North London could change all that though as they take on Crystal Palace in midweek, a team who have lost three out of the previous five Premier League matches. Arsenal, on the other hand, go into this match at the back of three consecutive wins in the league.

Also, the Gunners have kept a clean sheet in their last 3 away matches in the league which is a great boost for Mikel Arteta but after that negative performance against Chelsea, Arsenal will need to show their attacking flair in midweek.

Bern Leno will remain in goal but Arsenal’s defensive line could see a few changes against Palace. Hector Bellerin is likely to be ruled out with an injury and if he is not fit then Calum Chambers will play as the right full-back.

Pablo Mari, Gabriel and Rob Holding played in a three-man defensive line against Chelsea but one of them is going to have to move to the bench in midweek and we have a feeling it’s going to be Gabriel.

Granit Xhaka could be another injury absentee as the Swiss international still recovers from his groin injury. This means one midfield spot is up for grabs and Ceballos and Elneny will be fighting for that spot.

Nicolas Pepe has done pretty decently on the left flank and there’s a big chance the Arsenal boss will use him in that role once again with Bukayo Saka operating on the right-hand side.

Lacazette continues to get back to full fitness and we doubt if he is ready to get a start or not. Aubameyang is likely to keep his place as the main centre-forward against Crystal Palace.

Emile Smith Rowe is going to get the nod ahead of Martin Odegaard in the No 10 role despite both of them starting against Chelsea. 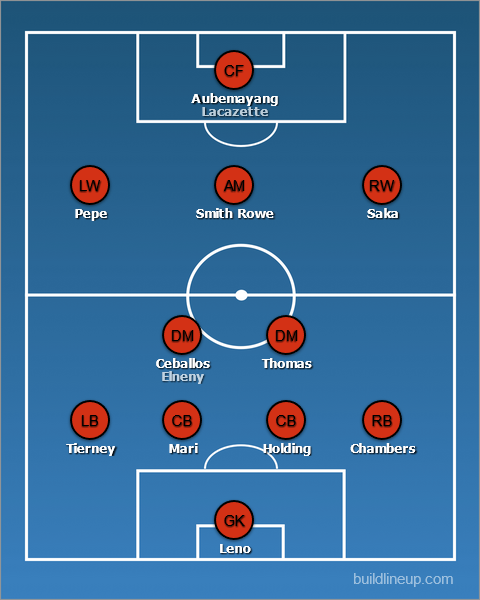 Read: Is this 24 Y/O centre-back set to snub an interest from Arsenal and join Tottenham in the summer?

Read: Why Arsenal can’t be blamed for their ultra-defensive performance against Chelsea.

Billy Gilmour has been receiving plaudits for his top-class performance against England on Friday but according to Steve Clarke, there was one player who...
Read more