Chelsea have been totally transformed under Thomas Tuchel but this weekend could prove a big test for the Blues boss as his side take on Brentford away from home.

The Bees have caught everyone’s attention this season, losing just one out of their first seven Premier League matches. While we don’t expect them to pick up all three points on Saturday but they are sure to give a tough fight to Chelsea.

Chelsea are currently sitting at the top of the league table but teams like Man City and Liverpool are breathing down their necks so anything other than a win could force them to slip down by the end of the weekend.

The away side are undefeated in 11 out of their previous 12 league matches but this weekend Thomas Tuchel might be without some key players meaning the manager will have to use all his wits to name his strongest starting XI.

Thiago Silva will be unavailable for selection because he’s currently with the Brazilian squad and will not be able to make it back in time.

And if this was not problematic enough then there’s a doubt over the fitness of Antonio Rudiger as well. The defender did not play for Germany in their World Cup qualifier against North Macedonia and it’s still not sure if he will be facing Brentford or not.

If Rudiger is not available then Christensen and Chalobah will start in central defence and Azpilicueta will then come back into the back line.

N’Golo Kante and Reece James have both recovered from their respective injuries and have returned to training.

The club have confirmed: “Midfielder N’Golo Kante has returned to full training at Cobham following his period of self-isolation, whilst Reece James was also involved after withdrawing from the England squad last week due to an ankle injury picked up in the game against Manchester City.”

If Azpilicueta is playing as the third full-back then James will start, otherwise, he will be on the bench.

Brentford have a really strong forward line which could prompt the Chelsea boss to use Kante and Jorginho as the main midfield pairing on Saturday.

Mason Mount was actively involved for England during the international break and he’s in line to start against the Bees, alongside Timo Werner.

Romelu Lukaku suffered muscle fatigue during the break and as things stand, there are question marks over his participation on Saturday. If he is not fit then Werner will lead the line and Havertz will come into the side.

Chelsea predicted line up vs Brentford: 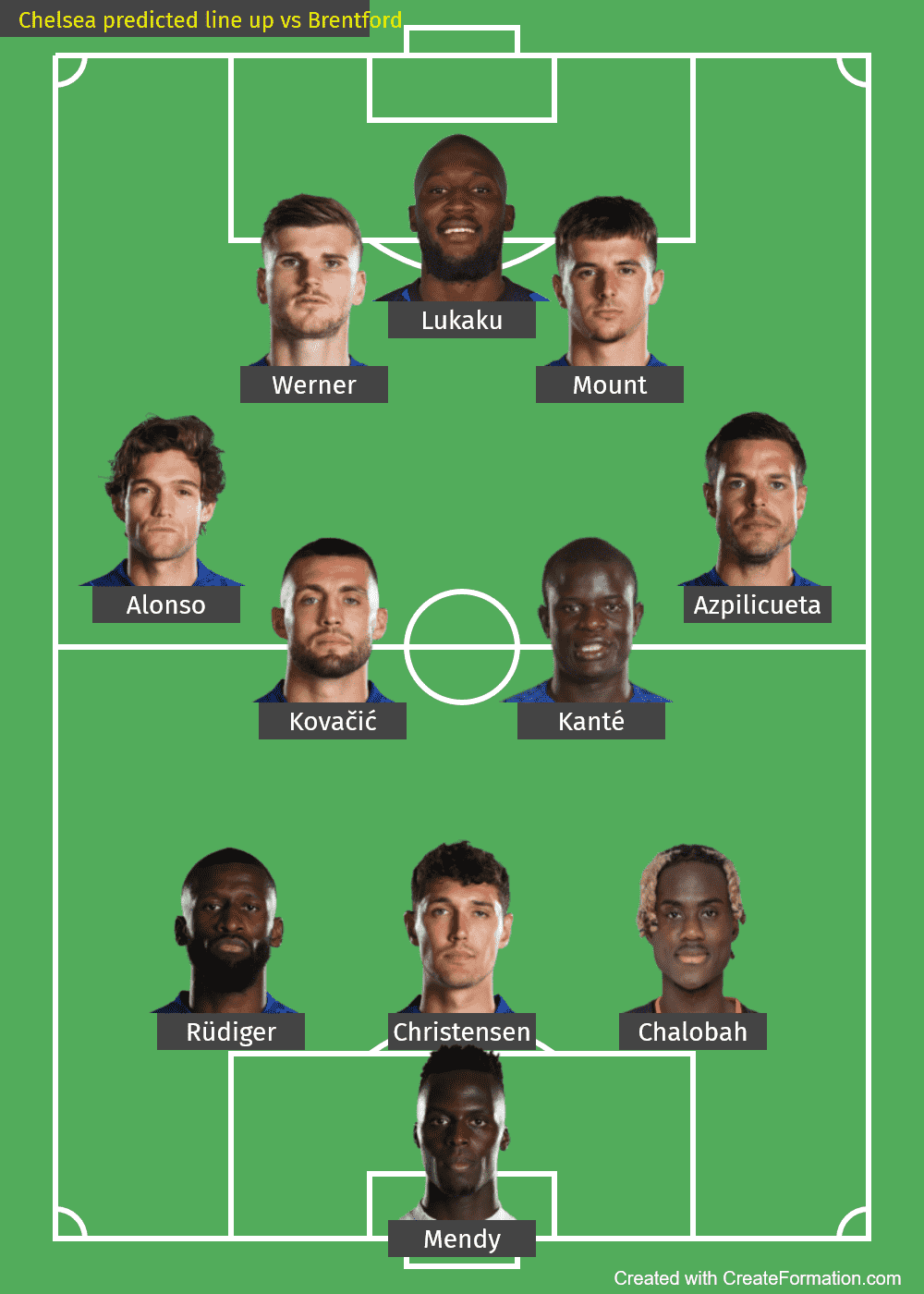 Chelsea forward Romelu Lukaku has had a full training session with the first-team on Thursday meaning he’s likely to start vs the Bees.

Romelu Lukaku in Chelsea training today…as expected. There was no real concern over his fitness ahead of Brentford. pic.twitter.com/Ea9O2p1TOd