Chelsea picked up three points in style in midweek, beating Juventus 4-0 in their Champions League group game and next up, they shift their focus to the mega clash against Manchester United.

The way the Blues swept away Juventus they are the clear favourites to pick up a win on Sunday as well. And the way Man United are playing, there’s every chance that we might see a repeat of Tuesday’s scoreline.

Chelsea are currently sitting at the top of the Premier League table and they have to pick up all three points to consolidate that position as they enter the packed winter schedule. Man City are breathing down their necks so if they fail to win on Sunday then Guardiola’s side could be level on points with them.

The London outfit have failed to beat Man United on their home turf in their last five encounters but with Ole gone and Tuchel weaving his magic, it will be a massive astonishment if Chelsea doesn’t win comfortably during the weekend.

Thomas Tuchel will want to make minimal changes to the first XI which demolished Juventus but Trevoh Chalobah could make way for Azpilicueta as Thiago Silva and Rudiger hold onto their place.

Ben Chilwell has been in stellar form but the left-back might have picked up a knee injury during the second half on Tuesday and he’s a major doubt for Sunday’s encounter vs Man United.

The manager told the press: ‘It worries me because he [Chilwell] was in such a fantastic moment, like Reece on the other side. They were in the best shape they could possibly be, so strong and so full of confidence and with such a lot of quality.

‘Chilly has a sharp pain in the knee and he was in a lot of pain. Now he feels a bit better so we will have an examination tomorrow to be more precise. We hope for the best and it’s not too bad news.’

Marcos Alonso is available as a backup but if Chilwell cannot be fit in time then Tuchel will lose a lot of attacking prowess.

N’Golo Kante started against Juventus but had to be taken off in the 37th minute after he twisted his knee. The manager is still not sure how serious the injury is so he too is a doubt for the Man United game.

Tuchel said: ‘It’s the same with N’Golo. He twisted his knee a little bit but hopefully it’s not too bad. N’Golo was again fantastic until the moment when he went off. Let’s hope for the best.’

Mateo Kovacic is already on the sidelines and if Kante also joins that list then Ruben Loftus-Cheek will be the player who will come into the side. RLC replaced Kante on Tuesday as well and ended the match with an assist. He should be able to do a good enough job against an out of form Manchester United.

Mason Mount came off the bench vs Juventus but he will be pushing for a start this time around. But both Hakim Ziyech and Hudson-Odoi were outstanding against Juventus so it will be harsh if either of them is dropped to the bench.

Pulisic played upfront but if Romelu Lukaku is back to full fitness then the American international will have to make way. Lukaku was fit enough to be on the bench against Juventus so there’s a massive chance that he will lead the line against his former side.

Kai Havertz is sidelined with a hamstring injury while Timo Werner will warm the bench once again on Sunday.

UPDATE: According to a report in the Telegraph, Chelsea are fearing that Ben Chilwell might have picked up an ACL injury which could require surgery. This means the left-back will certainly not be available on Sunday and right now he’s also running the risk of missing the rest of the 2021/22 season. 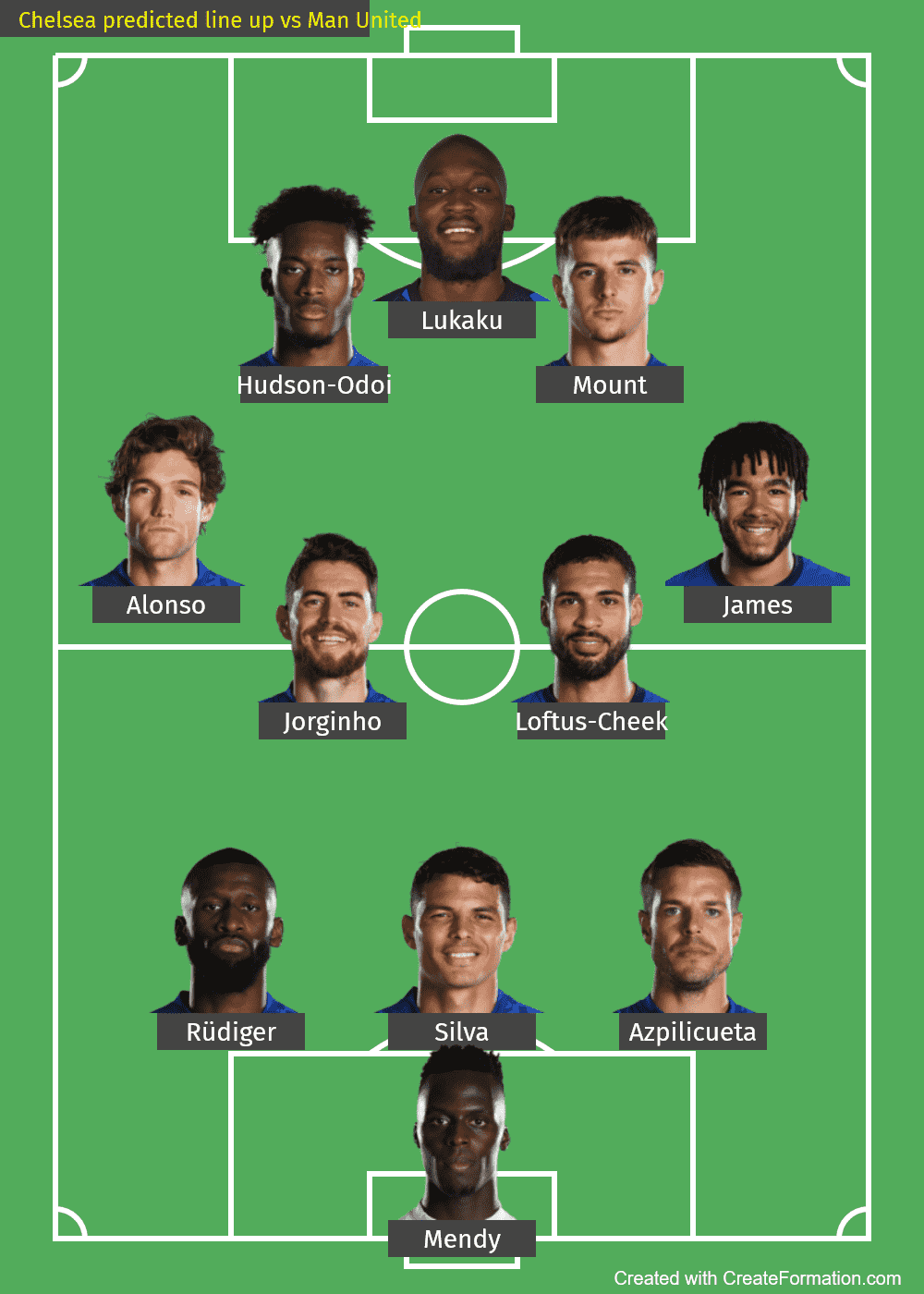