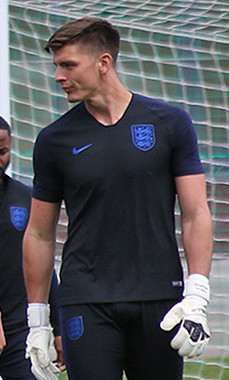 The Euro is just around the corner and it looks like Gareth Southgate will have to make a major reshuffle due to goalkeeper Nick Pope.

Nick Pope has been fighting Jordan Pickford for a No 1 spot in the England line-up but according to a report by The Athletic, the Burnley keeper is going to miss the Euro because of a knee surgery.

This is a major blow for the 29-year-old who was hoping to dethrone Pickford in the coming months and take his place in between the sticks during the Euros.

But apart from the keeper, this poses a problem for manager Gareth Southgate as well since he has now has to make some tough and potentially risky selection calls.

Who will replace Nick Pope for the Euro?

Jordan Pickford has more or less been the first-choice keeper for England under Southgate and we expect this to remain the same during the Euros as well.

But with Nick Pope out of the equation, the manager will need to bring in a backup keeper for the tournament and if everything falls into place then Manchester United’s Dean Henderson is going to serve that role in the coming months.

Dean Henderson has done really well in the past couple of months, taking over the No 1 role from David De Gea at the club and the youngster will be a really promising backup to Jordan Pickford.

Southgate will also have to choose a third-choice keeper for the Euro and here’s where things could get interesting.

West Bromwich Albion’s Sam Johnstone, according to some is likely to take up that role in the England squad while others feel Sheffield United’s Aaron Ramsdale could also be called up.

Jordan Pickford and Dean Henderson should be more than enough to cover the whole tournament but there has been a lot of football in the past one and a half years so there’s every possibility that players may pick up injuries at the drop of a hat.

So in such a scenario, the England boss will not risk taking any weak link to the Euro.

Chelsea managed to pick up a narrow win during the weekend against Palace and now they must prep themselves up for a pivotal Champions...
Read more