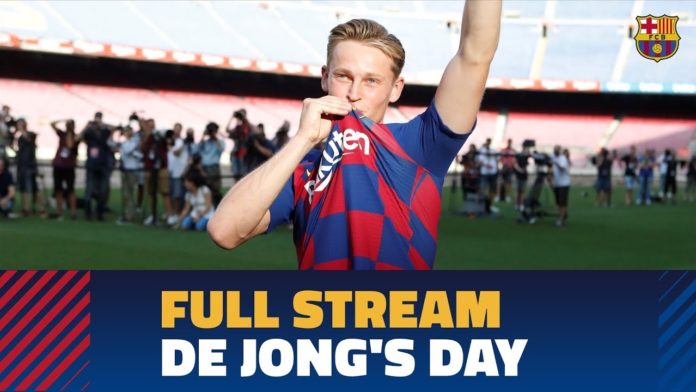 Frenkie de Jong had a breakthrough 2018-19 season for Ajax – especially in the Champions League and next campaign the midfielder will be plying his trade for La Liga giants Barcelona.

A youth product of Willem II, Frenkie de Jong played through the entire youth system at the club and in late 2015, De Jong made his Eredivisie debut against ADO Den Haag coming off the bench in a 1–0 home win.

At the beginning of the season, on August 22, 2015, Ajax purchased De Jong on a four-year contract, for €1 which included a 10% re-sell bonus. And from there on, the career graph for Frenkie de Jong just climbed upwards.

Last season, the midfielder played in 52 games across all competitions for Ajax scoring 4 goals and making 4 assists which was enough for Barcelona to come calling.

On 23 January 2019, Barcelona announced the signing of de Jong on a five-year contract, effective from 1 July 2019, for a reported fee of €75 million. And last week, the 22-year-old was officially unveiled in front of the Camp Nou faithful.

A lot of great things are expected from Frenkie de Jong and many pundits have predicted that the Catalans have finally found a replacement for the likes of Xavi and Iniesta.

The player though has made it clear that he does not wish to be compared with these legends.

“I don’t want to be compared with those players,” De Jong told Barca TV.

“It’s the perfect club for a midfielder. They hold onto the ball well, they control the play, it suits me perfectly.”

Now though, Frenkie de Jong has dropped a bombshell claiming that he had plans to join Arsenal as a stepping stone to joining Barcelona in the near future.

He told Voetbal International: “In my mind, I have had the following list for a long time: Ajax-Arsenal-Barcelona, ​​call it the Marc Overmars route.

“But then again, if you can go directly to Barcelona, ​​then you are right where you want to be. Faster than you ever dared to dream.”

If Frenkie de Jong did end up joining Arsenal then surely it would have been a great signing for the Gunners but Barcelona cut the midfielder’s efforts short by bringing him onboard directly from Ajax.

Read: Looks like Arsenal have made zero progress in the signing of ‘this’ Scottish defender.