Manchester United defender Harry Maguire has missed the last two Premier League matches with an injury and the difference in the team’s performances were there for everyone to see.

Man United have lost both their previous two league matches, first to Leicester City and then on Thursday vs Liverpool. And in both these games, Harry Maguire was watching from the stands.

The centre-back picked up a knock during last weekend’s win over Aston Villa and Maguire picked up an injury during the second half of that game. At first, it did not look too much but fears arose when the defender was seen leaving the stadium with a protective cast around his leg.

And in the next two matches, the captain was seen wearing that cast which automatically put him in doubt for the Europa League final, scheduled for the end of this month.

Manchester United have two more Premier League matches to play before they take on Villarreal in the final and speaking to the press, manager Ole Gunnar Solskjaer has claimed that Harry Maguire could be fully fit by the time his side head to Poland.

Solskjaer said, as quoted: “Hopefully we can have good news early, but I will give him as long as it takes because he has shown his importance. We’ve known it all along but maybe some people open their eyes more when he’s not playing.

“I certainly felt I became a very good player when I was injured. People suddenly realised what I could do as a sub or what I was as a player.

“Harry has been our leader, and our captain ever since he came in, he’s been more or less ever present so of course he’s a big miss at the moment but, hopefully he’ll speed up the recovery and be ready for the final. I’ll give him as long as he needs until he says yes or no.

“He’s making progress, but we’ve consciously taken the route of not testing him out too early, too quickly, because we don’t want to aggravate something.

“Harry is very – how do you say? – he wants this so much, so he doesn’t want to take any risks either. When I spoke to him this morning, he was quite positive, which is good.

“Naturally, the day after it happened we were all down, but we saw early on or decided we have to focus, have to be positive and think that you’re going to make it until you have to say ‘no’. I’ve always been an optimist, so we’re positive.”

Man United have already secured a top-four finish so they are in no hurry to bring Harry Maguire back for their next two league games. And this will surely be a blessing in disguise for the centre-back since he can now work on his fitness without any major hurry.

Read: Man United’s loss to Liverpool shows exactly what Solskjaer needs to do in the summer.

Read: Liverpool & Man United likely to fight it out for this 24 Y/O midfielder. 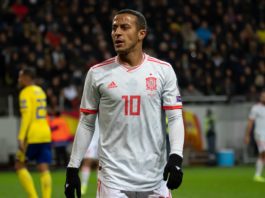 Guardiola might punish this player by keeping him on the bench...