Football Fan Base
Home Premier League | News Liverpool FC News Here’s how Liverpool are expected to line up vs Arsenal in the...
Facebook
Twitter
Pinterest
WhatsApp

Liverpool take on Arsenal in the 2nd leg of the Carabao Cup semi-final and Jurgen Klopp’s side will come into Thursday’s game as the outright favourites.

The Anfield outfit failed to score against the Gunners in the 1st leg despite Mikel Arteta’s men playing most of the match with 10 men. But this week, the German will ensure that there aren’t any such lapses, especially since the Gunners have so many injuries.

Unlike Arsenal, Liverpool did play in the Premier League during the weekend, beating Brentford 3-0. The Reds also have some players who have come for the AFCON so Klopp also have some thinking to do.

Liverpool take on Crystal Palace after this and then they have an FA Cup game vs Cardiff City. This is why the manager will not want any unnecessary injuries and for that Liverpool will have to ensure that they finish up Thursday’s game with time to spare so that Klopp can make rotations.

Van Dijk and Joel Matip played in central defence vs Brentford but Ibrahima Konate is expected to come into the starting line up against Arsenal.

Midfielder Thiago is still out with a groin injury and as per the last update, the Spaniard is going to be on the sidelines for some time. With Thiago ruled out, Fabinho will play defensive midfield while Henderson is going to be the other midfielder.

Fabinho has been involved in more goals (3) in the last 3 games than any other Liverpool player:

⚽️⚽️ vs Shrewsbury
❌ vs Arsenal
⚽️ vs Brentford

No Salah? No Problem. 👀🇧🇷 pic.twitter.com/s2hmBPYrlA

Naby Keita is off for international duty meaning Curtis Jones will have to partner Hendo and Fabinho.

Mo Salah and Sadio Mane are also playing in the Africa Cup of Nations which is why Oxlade-Chamberlain was playing on the right wing against Brentford. But the England international picked up an ankle injury during the weekend and he’ll be touch and go for Thursday’s clash.

The manager said after the Bees win: “He rolled his ankle and now we hope it’s nothing serious but we will get the further information [at the] earliest [Monday], that’s how it is [with] these situations.”

If Chamberlain is not fit then Minamino will play on the left-hand side while Jota will move to the right flank. Since Jota will be playing on the wings, Bobby Firmino will lead the line.

Liverpool predicted line up vs Arsenal: 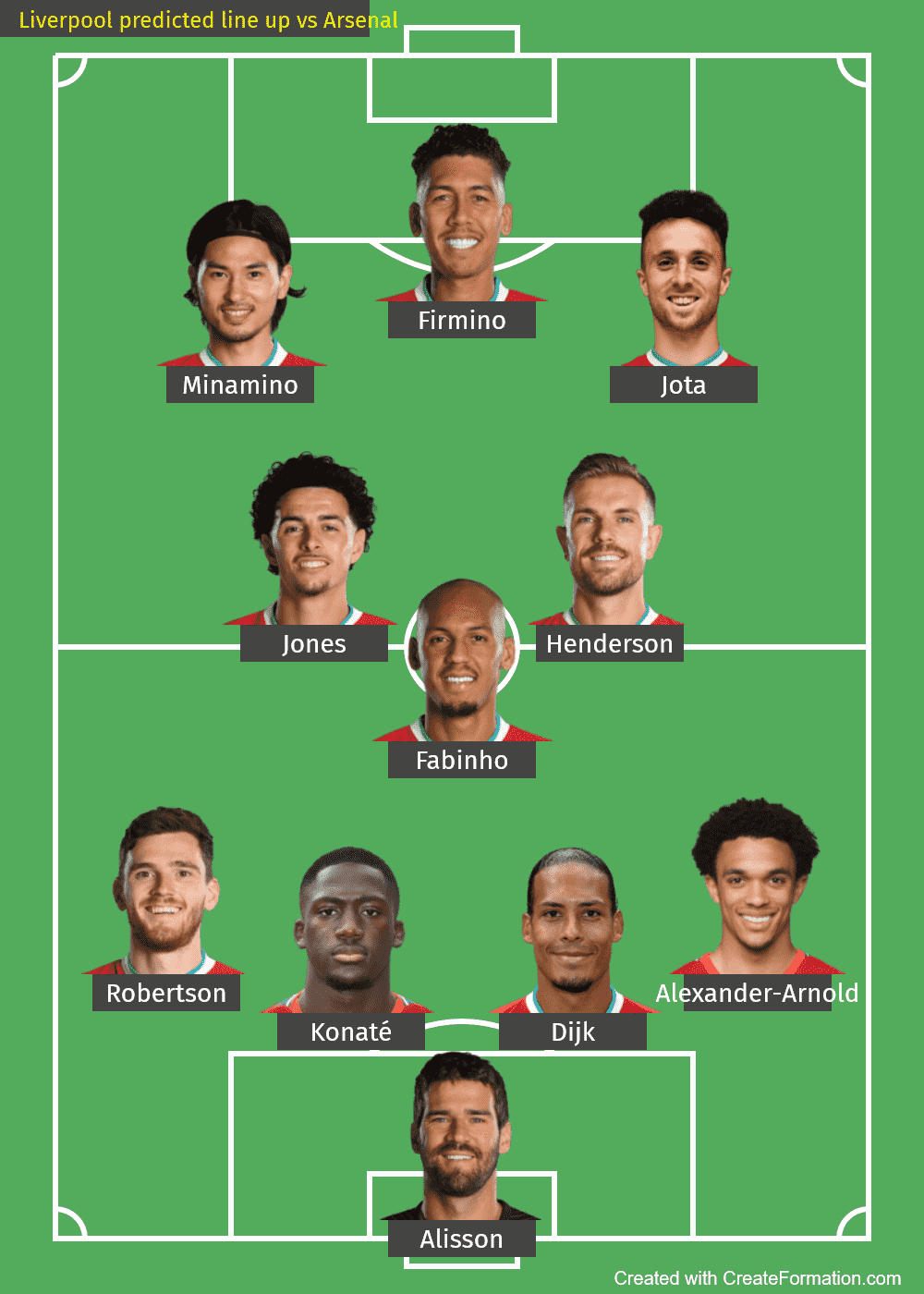 Read: Is the Arsenal vs Liverpool game set to be postponed?

Man United take on Crystal Palace in their final Premier League game of the season but several United players will be absent for this...
Read more

There have been reports of a possible food poisoning within the Spurs squad and one of the players who's been affected the most is...
Read more

Arsenal lost to Newcastle United on Monday night and this has suddenly given Spurs an edge in securing the final Champions League spot on...
Read more

Will this transfer move from Man City be a killer blow for Liverpool next season?

Liverpool have been one of the best teams in Europe over the past three or four years but they are peaking at the same...
Read more