Rangers FC kicked off their 2021/22 SPFL season in style, beating Livingston 3-0 on Saturday. And next up, they will shift their focus to Europe where they face Malmo.

The Gers face Malmo in the 3rd qualifying round, the first leg of which will be played on Tuesday at the Swedbank Stadion in Sweden.

Steven Gerrard’s side have picked up where they left off last season and after the fine performance during the weekend, we can safely say that Rangers have a great chance at playing in the Champions League proper, after missing out for more than a decade.

The Scottish side will be looking to pick up a win and ease the pressure for the second leg but Malmo have begun the new campaign in fine form as well so there’s a chance that Gerrard’s side will have to rely on counter-attacking football in the 1st leg.

The Gers boss rested a few first-team players against Livingston but most of them should feature in the starting line-up during the weekend.

Allan McGregor was on the bench against Livi but he will come back in between the sticks on Tuesday evening.

Filip Helander’s return will be a big boost for Steven Gerrard but we think Leon Balogun will get the nod to partner Connor Goldson in central defence. Calvin Bassey might not be that lucky as he should be replaced by Borna Barisic with James Tavernier keeping his place on the right-hand side of defence.

The midfield trio of Glen Kamara, Steven Davis and Joe Aribo has been working wonders for the Gers so the manager will be reluctant to make a change unless absolutely necessary.

Ianis Hagi picked up a slight knock but there’s a big chance he should be fit enough to feature in the starting line-up against Malmo.

Kemar Roofe remains suspended for this game while Alfredo Morelos will also be an absentee due to the quarantine rules. So, Fashion Sakala will lead the line on Tuesday. 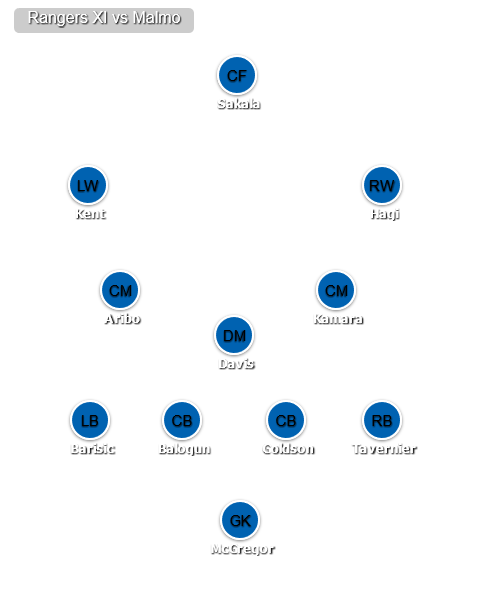 Click here for all the latest football news & updates.

Chelsea managed to pick up a narrow win during the weekend against Palace and now they must prep themselves up for a pivotal Champions...
Read more