Rangers FC face RB Leipzig at Ibrox this week for the 2nd leg of the Europa League semi-final and this is possibly the best chance they will get to reach a major European final.

They go into this tie with a 1-0 deficit so there’s a very realistic chance of a turnaround. Obviously, it will be an uphill task but Rangers FC are very much in the tie.

The manager would have loved to rest most of his regular starters before this high-profile encounter but they had to play an Old Firm Derby during the weekend so Giovanni van Bronckhorst did not have that luxury.

The Germans have a more quality squad but the SPFL side have beaten some of the better sides in Europe so their confidence and adrenaline will be sky-high. RBL are undefeated in their previous six Europa League ties but Ibrox is a very intimidating place to come to so they will have to keep hold of their nerves.

Van Bronckhorst used a 5-3-2 system in the 1st leg where Lundstram slotted in as the third defender but for Thursday’s match, he is likely to go back to his usual 4-3-3 system.

His tactics in Germany were successful as RBL managed only 10 shots on target, their lowest in the Europa League this season but now, the onus is on the Scottish side to come up with a goal.

He will shape up his side in such a way that going forward they will hold their shape with a traditional back-four but whenever Leipzig are on the front foot, one of the defensive midfielders will have the license to slot into the backline.

Leon Balogun missed the weekend’s match through suspension but he’s not expected to get a start in midweek either. Bassey and Goldson will most likely be the two central defenders with Tavernier and Barisic playing out wide.

Filip Helander is sidelined till the summer with a foot injury.

John Lundstram will play as the defensive screen with Glen Kamara and Ryan Jack operating as the two central midfielders. If Kemar Roofe is missing then the manager could go with a false-nine system with Joe Aribo playing in that role and Sakala operating on the right flank.

Aaron Ramsey is facing a race against time to be fit for Thursday’s game and even his manager is not 100% sure if he will be ready on time or not.

Kemar Roofe will also go through a late fitness test to determine his availability but if he is not fully fit then the manager has to put his faith in Fashion Sakala.

The manager said in his press conference:“We still have one day to prepare. Today will be an important day for both. I cannot tell you if they are in the squad for tomorrow or not.”

In the derby, Sakala played out wide on the right-hand side and had a very good outing so if Roofe is not available then the manager will opt for the same structure on Thursday. 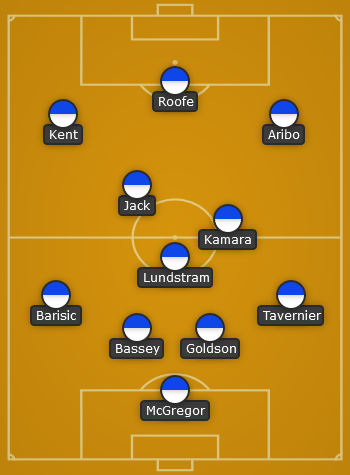 Read: Rangers are ahead of Bournemouth and Fulham in the race to sign this Premier League midfielder.

Read: Steven Gerrard is eager to bring one of his ex-Rangers player to Aston Villa.