Chelsea are on a roll under their new manager and in midweek they even managed to overpower Real Madrid, holding the European giants to a 1-1 draw in the Champions League semi-final.

Next up, the Blues will shift focus to finishing in the top-four of the Premier League as they look to beat Fulham at Stamford Bridge.

Chelsea are undefeated in 13 of their last 14 matches in the Premier League and have kept a clean sheet in 6 of their last 7 home games. So there’s no doubt that Thomas Tuchel’s side go into this game as the out-and-out favourites, more so since they have no major injury concerns.

Fulham, on the other hand, are currently 18th on the league table with 27 points but the Craven Cottage side are undefeated in 9 of their last 10 away matches so it will be no walk in the park for Chelsea.

The Blues are holding onto the fourth spot on the table and even if they lose they will not be dethroned due to their better goal difference than West Ham United. But Tuchel will clearly be thinking of picking up a win and going six points clear.

Rudiger, Thiago Silva and Christensen paired up in central defence but we expect at least one of them to be rested before the key second leg game vs Real Madrid.

Since Fulham are winless in their previous five league matches, Edouard Mendy could also be rested as Kepa Arrizabalaga comes back into the side.

Mateo Kovacic has been on the sidelines due to an injury but Tuchel had claimed that the midfielder is likely to be fit for the Fulham game. If Kovacic is available then the Chelsea boss will undoubtedly rest N’Golo Kante on Saturday.

Reece James came off the bench vs Real Madrid so there’s a big chance he gets to start vs Fulham. But we have a feeling that Thomas Tuchel will be preserving him for the second leg of the Champions League semi-final so it’s Hudson-Odoi who’s likely to feature as the right wing-back.

Pulisic and Timo Werner will both be rested on Saturday since Tuchel has multiple options up front. Hakim Ziyech is expected to come back into the side along with Kai Havertz.

Tammy Abraham and Olivier Giroud have fallen down the pecking order and we expect them to remain on the bench this weekend as well.

How Chelsea are expected to line up vs Fulham: 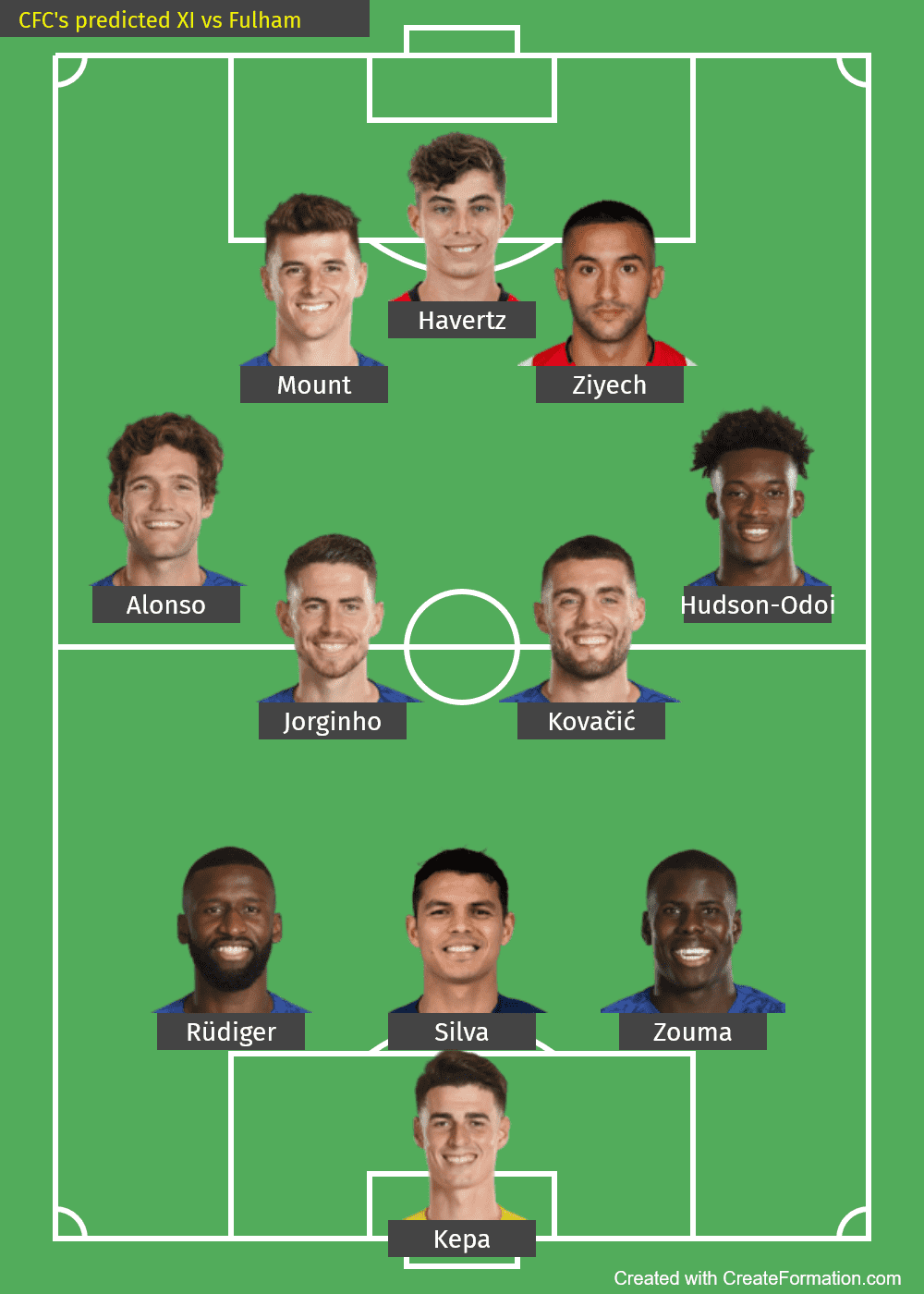 Read: Will the second leg vs Real Madrid be a disaster for the Blues?

Read: Tuchel not content with his team’s draw against Real Madrid.

Read: Pundit warns Chelsea flop that his time is running out at the club.

4-2-3-1 Arsenal’s predicted line-up vs Chelsea: Aubameyang and Lacazette both to feature?

4-2-3-1 Arsenal’s predicted line-up vs Chelsea: Aubameyang and Lacazette both to feature?