England are very much on route to qualifying for the 2022 World Cup and now it’s time for the manager to start selecting his final starting line up. The right-back position has been much debated about in the past year and with just about a year left for the World Cup, we take a deeper look at the Kyle Walker vs Alexander Arnold debate.

England face Albania and San Marino during the ongoing international break and these two games should give us a good idea as to who could be England’s first-choice right-back next November.

Kyle Walker is the obvious choice for that role(as things stand) but manager Gareth Southgate has not failed to acknowledge the good work that both Reece James and Alexander Arnold have done during the 2020/21 season.

The manager said in his press conference a few days earlier: “Kyle was in the team of the tournament for the Euros.

Trent Alexander-Arnold has scored one goal and provided six assists this season.

Unreal from the right back ✨ pic.twitter.com/BY7Q2nWVLk

“Reece and Trent are at a really good level. Tino Livramento has had a great start to the season, along with Tariq Lamptey and we have just seen Matty Cash go to Poland, but we have a lot of good right-backs in the squad and others pushing them.

“We have conceded five goals in eight games, so defensively we haven’t been doing a lot wrong. If they can add quality with the ball too, that is a bonus. The players we have, have got that.”

Kyle Walker vs Alexander Arnold: All round vs one dimensional?

TAA had been one of the standout players for Liverpool in 2019 but last season his graph took a massive nosedive.

His performances for the club were all over the place as a result of which he was in and out of the England squad. This obviously helped Kyle Walker cement his position even further and he got to feature as the main right-back/right-sided defender in the Euros.

But Alexander Arnold has managed to successfully turn things around this campaign so there’s no doubt he will be pushing for a place in the England first XI.

The Liverpool full-back is generally known as a top-class attacker but every now and then pundits have raised question marks over his defensive skills. But if we take a look at the stats this season then we will see that TAA has outperformed Kyle Walker even in the defensive areas.

He’s played nine PL games so far and has provided four assists. Not to mention he currently has an xA of 3.69 which is the sixth-best in the Premier League.

Walker, on the other hand, has played the same number of games but is yet to provide an assist for Manchester City in the league.

And now just to shatter all the myths, Alexander-Arnold has made five blocks in the nine matches he’s played while Walker has made only one. The former has also made 48 key interceptions as compared to Kyle’s 35.

Liverpool have not been so solid in defence this campaign but despite that TAA has some pretty decent numbers which clearly goes on to show that he has worked on his questionable areas in the past year. 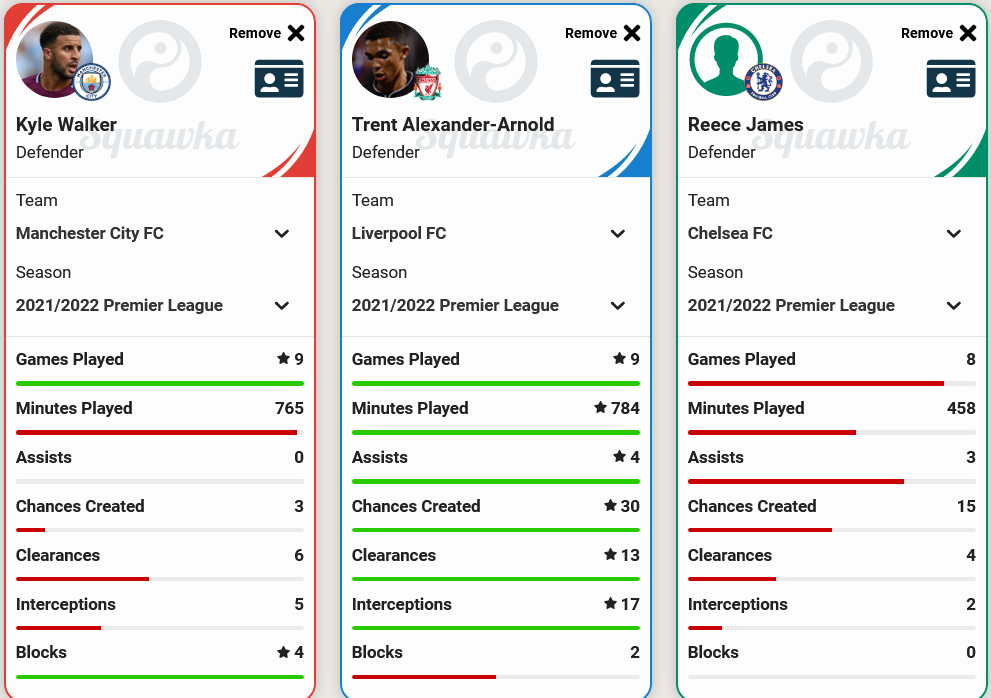 Reece James has also found a place in England’s squad during the international break and the Chelsea man is fast increasing his worth for both club and country.

This season he’s played just 458 minutes(almost half of what TAA has played for Liverpool) across eight games for the Blues but he’s still managed to rake up three assists and create 15 chances.

James is not likely to feature in the starting XI against Albania or San Marino but he’s one player who could snatch that right-back role by the time the World Cup starts.

In our final conclusion in the Kyle Walker vs Alexander Arnold debate, we have to say that the Liverpool man has certainly levelled up his performance from last season but it’s still might not be enough to overthrow Kyle Walker, not atleast during this international break.

If he keeps on performing at the same rate then there’s no way Gareth Southgate will be able to keep ignoring him for much longer but in the next two games it will be Kyle Walker who will play as the right-back and maybe Alexander Arnold will come on as a second-half sub.