Leicester City have suffered a few setbacks in the Premier League in the past couple of weeks, winning just two out of their previous five league matches.

Last weekend, they surprisingly went down 2-4 at the hands of Newcastle United and this loss means Rodgers’ side have now slipped to the fourth spot on the table. West Ham United are within sniffing distance of them meaning Rodgers’ men will have to beat Manchester United on Tuesday if they wish to play in the Champions League next season.

The Foxes are undefeated in 11 of their last 12 away matches in the league but this crucial game vs Manchester United has come at a really awkward time for Brendan Rodgers since his side have a massive FA Cup final vs Chelsea just four days later.

Man United should be the favourites going into this match but Solskjaer’s men have just played a game on Sunday meaning the United manager could be forced to make a lot of changes to his usual starting line-up. And Brendan Rodgers can surely advantage of this.

Jonny Evans picked up an ankle injury during warm-up before the Newcastle United game and going by his manager’s words, the defender still remains a doubt for Tuesday’s game.

Rodgers told the press: “We’ve been managing him over the last couple of weeks and he’s come through really well. He was in a lot of pain [last Thursday] and woke up [on Friday] feeling better. In the warm-up, just as he was coming in before kick-off, he felt discomfort.

“Jonny’s a real warrior so you know if he’s not able to at least give it a go, then he’s really suffering. We’ll just have to see how he is and what his availability is going forward.”

If Evans is not fully fit to play then Soyuncu and Fofana will be accompanied by Castagne in the three-man backline. Daniel Amartey also has the chance of featuring in defence on Tuesday.

James Maddison got a solid 77 minutes on the pitch vs the Magpies so he is definitely going to start in the No 10 role vs Manchester United. But his manager has hinted that Maddison might not have the capacity to play the full 90 minutes.

The manager updated: “He’s not 100 per cent. That’s something I’ve said before, he’s not up to game speed. The problem is you’ve got to give him the minutes and time to try and get him there, likewise with Ricky (Ricardo). These are things to consider coming into the last important games now.”

Ndidi could be rested with Dennis Praet coming into the side on Tuesday if Rodgers has one eye on the FA Cup final. Tielemans is going to keep his place from the Newcastle United game.

Jamie Vardy and Iheanacho have been a constant figure in the attacking department for Leicester City so far this season but there’s a big chance that one of them is rested before that key final game at Wembley.

How Leicester City could line up at Old Trafford: 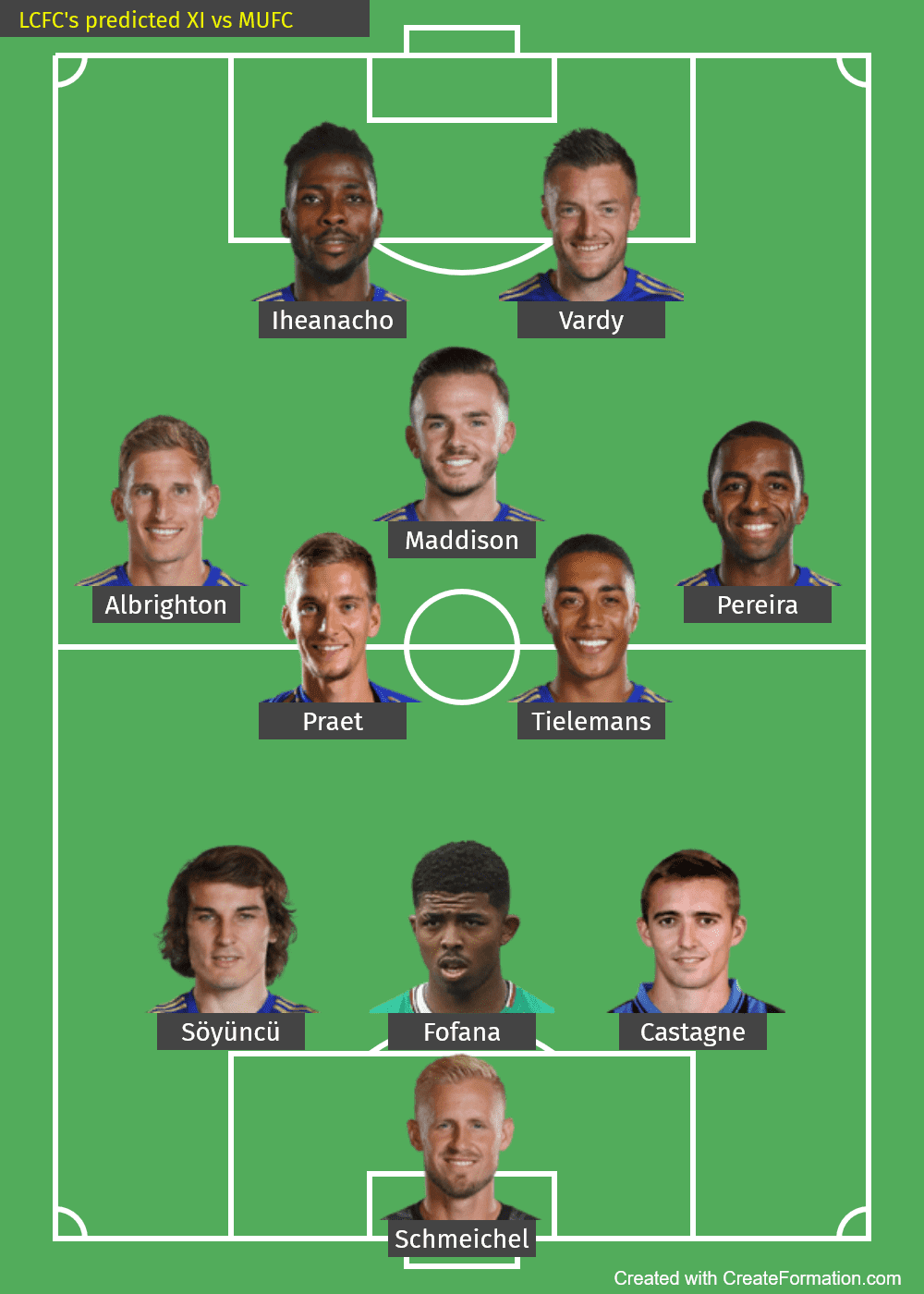 Read: Man United suffer a major injury blow as they are about to face Leicester and Liverpool.

Read: Man United urged to sign two players if they want to compete for the PL.