Liverpool secured a place in the Carabao Cup final by beating Arsenal in midweek and their next Premier League game will hold a lot of importance in terms of the title race.

Manchester City have dropped points on Saturday after Southampton held them to a 1-1 draw meaning Liverpool have a wonderful chance at closing the gap at the top of the table. Jurgen Klopp’s side take on Crystal Palace on Sunday and going into this game they are 12 points behind Man City.

The Anfield outfit are undefeated in 29 of their last 31 matches in the league and given that Palace have won just one out of their previous five league outings, we predict an easy win for Liverpool on Sunday. The Eagles have played some nice football under Vieira but these performances have not been converted into points, unfortunately.

Liverpool’s recent form has not been great but with City dropping points, Klopp will definitely see a ray of hope at reigniting his team’s title challenge. The German manager has several first-team players missing so he is not expected to make too many changes to his starting line up from Thursday’s 2-0 winner against Arsenal.

Alisson was rested on Thursday but the Brazilian will come back into the side on Sunday. Joel Matip was taken off at half-time of the Carabao Cup semi-final second leg which immediately sparked injury rumours.

But Klopp has said in his pre-match press conference for the Palace game that the substitution was just a precaution.

The German told the press: “No, Joel was not tactical. My God, how good was Joel.

“We thought something is not 100 per cent right and you can change five times, it’s not a situation where you ask, ‘What [can we do?]’ – we had Ibou and Joe on the bench, so we just changed. Nothing else.”

Oxlade-Chamberlain is still recovering from his ankle injury and the Liverpool boss has accepted that it will only be a late fitness test that will decide the England international’s availability.

“Ox, we hope and pray, he was running yesterday [Thursday] but we don’t know what that exactly means for today. It would be helpful if he could train before the game. I don’t know yet,” the manager added.

If Oxlade-Chamberlain is not fit then Minamino will be the one who is going to operate on the left wing while Diogo Jota played on the other wing.

Fabinho suffered a major knock during the Arsenal game but there are updates that the defensive midfielder should be fit to start on Sunday. Naby Keita is out for the AFCON while Thiago is missing with an injury so if Fabinho somehow misses out then the problems will multiply ten-folds for the manager.

Liverpool predicted line up vs Palace: 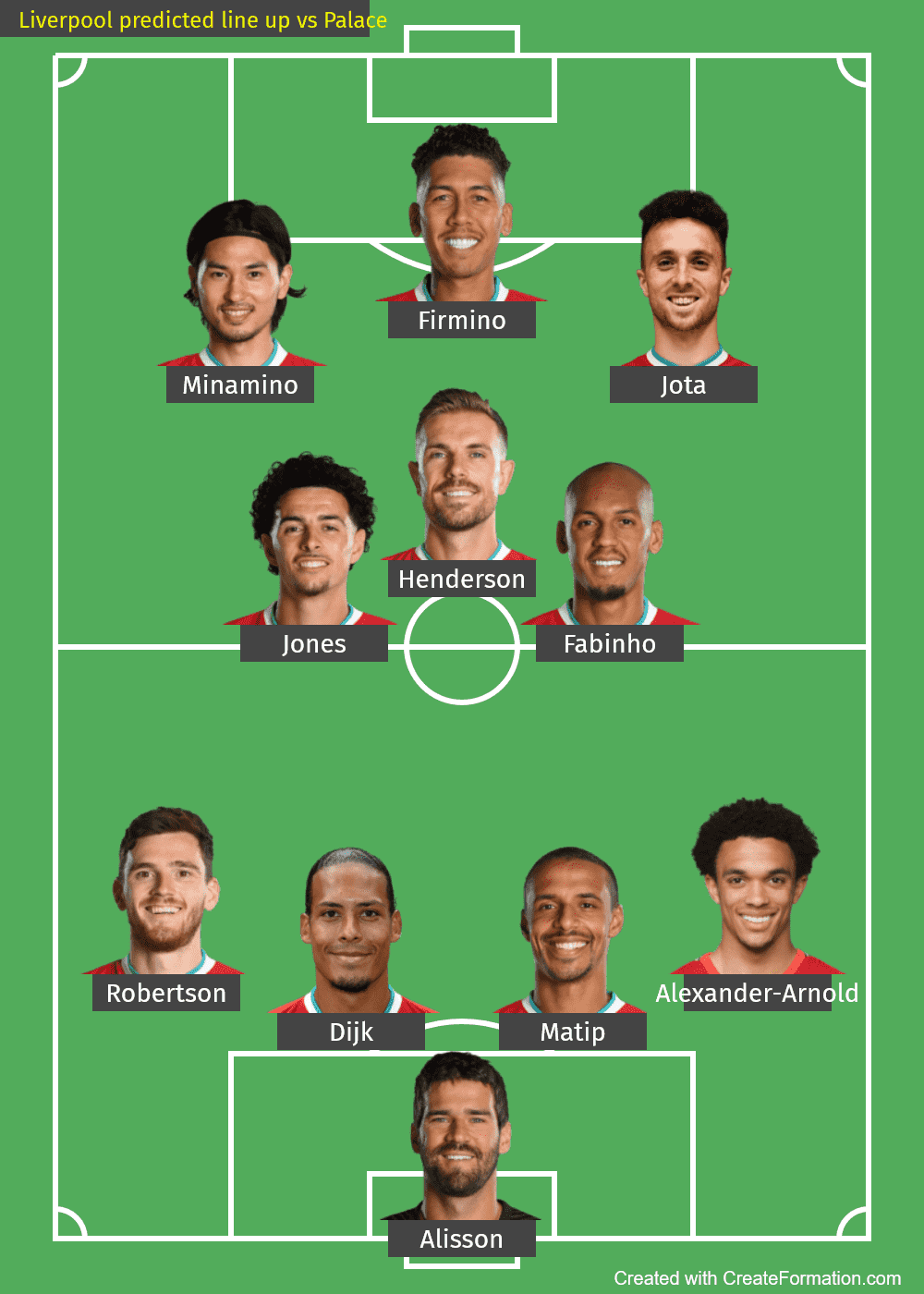 Man United take on Crystal Palace in their final Premier League game of the season but several United players will be absent for this...
Read more

There have been reports of a possible food poisoning within the Spurs squad and one of the players who's been affected the most is...
Read more

Arsenal lost to Newcastle United on Monday night and this has suddenly given Spurs an edge in securing the final Champions League spot on...
Read more

Will this transfer move from Man City be a killer blow for Liverpool next season?

Liverpool have been one of the best teams in Europe over the past three or four years but they are peaking at the same...
Read more