Man City finally broke their European voodoo to enter the semi-finals of the Champions League by beating Borussia Dortmund with an aggregate scoreline of 4-2.

Pep Guardiola will look to build on this fine win when his side take on Chelsea in the semi-final of the FA Cup this weekend at the Wembley Stadium. City have a fine record against Chelsea, beating them six out of nine times across all competitions and the kind of form they are in right now, the Citizens undoubtedly go into this match as the favourites.

Chelsea are one of the most defensively rigid sides in the Premier League right now while Man City know only one way of playing their football. So we can imagine that Saturday’s encounter will be a direct face-off against Chelsea’s backline and City’s forwards.

City are obviously looking for a silverware clean sweep this season and they almost have one hand on the Premier League title. And so if they can beat Chelsea in the semi-final of the FA Cup then they will move one step closer to at least securing a domestic treble.

Zack Steffen will be eager to start in goal but since it’s Chelsea, Pep Guardiola is expected to go with Ederson in front of goal this weekend.

John Stones and Ruben Dias was the usual centre-back pairing in midweek against Dortmund but there’s a big chance that Stones moves to the bench as Aymeric Laporte gets a chance to start.

Joao Cancelo was surprisingly not used by Guardiola in the second leg but he is a guaranteed starter at left-back against Chelsea on Saturday.

The Man City boss once again refused to use a recognized striker up front in midweek with Kevin De Bruyne playing in that role. But against Chelsea, Gabriel Jesus should be coming back into the side meaning De Bruyne will return to his usual role in midfield.

Fernandinho was unused vs Dortmund and we expect him to start on the bench against Chelsea as well. This will also allow Rodri to get another start in defensive midfield.

Bernardo Silva had an average game in midweek and he is not likely to get a start in the semi-final clash. Raheem Sterling came off the bench against the German side but he should feature from the start this weekend, in place of Riyad Mahrez.

Phil Foden had another outstanding game for Man City on Wednesday and the youngster is fast becoming a regular feature under Pep Guardiola. He is likely to start on the left wing vs Chelsea as well.

Man City have only one injured player in the form of Sergio Aguero who is currently ruled out of the weekend’s game.

How Man City could line up vs Chelsea: 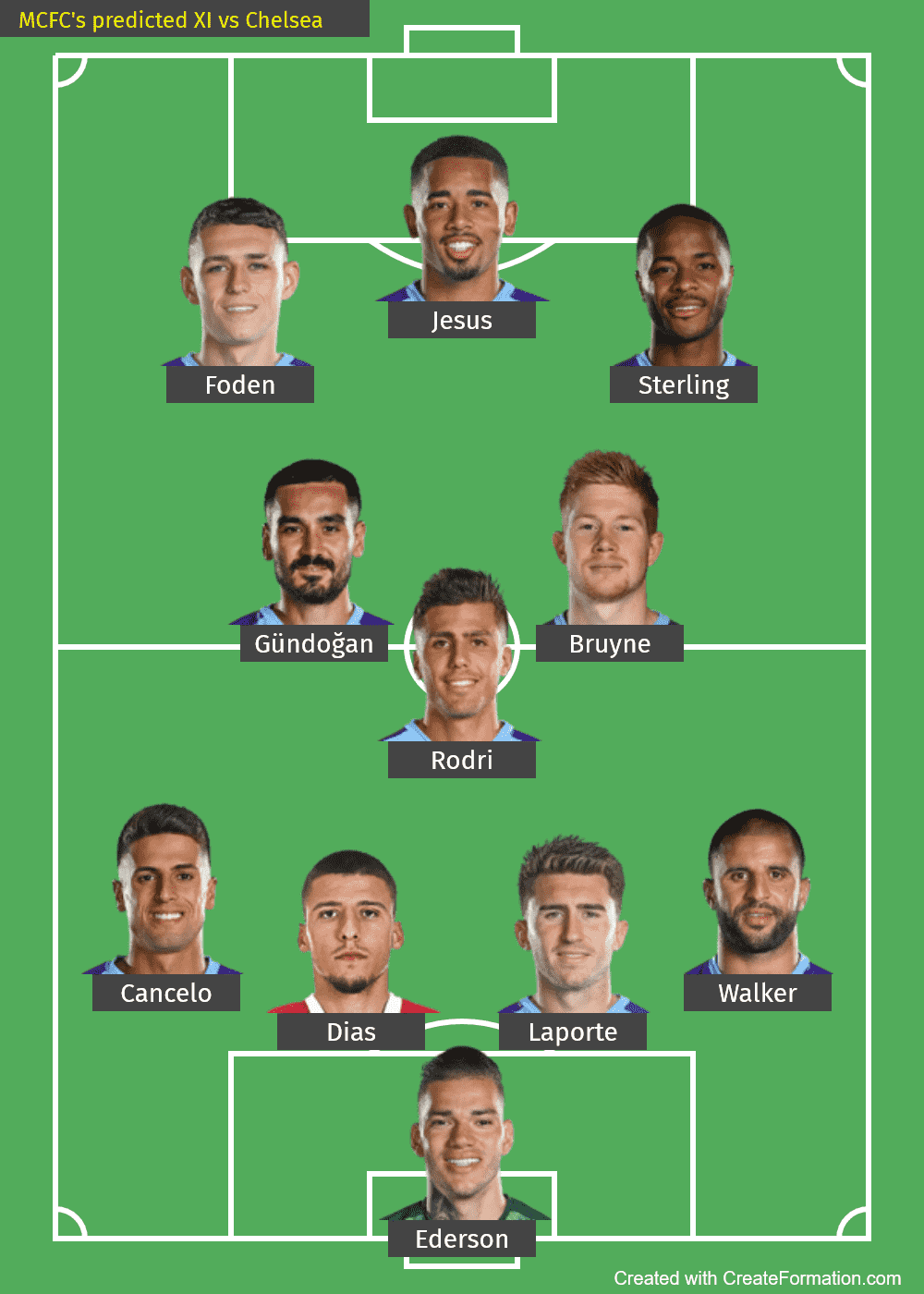 Read: How Chelsea could line up vs MCFC at Wembley.

Read: Is this Chelsea-linked player on his way to Man United in the summer?