Man United got back to winning ways in midweek picking up a 2-0 win over Villarreal in the Champions League and now they face the uphill task of beating Chelsea.

The Blues are in the form of their life, losing only one league game this season whereas Man United have tasted defeat in four of their previous five Premier League games. Michael Carrick managed to set up a side that beat an out-of-ideas Villarreal side but there’s very little chance that the stand-in coach has what it takes to outsmart Thomas Tuchel.

United are currently eighth on the league table – 12 points behind leaders Chelsea meaning if they stumble on Sunday then they could very well slip to the second half of the table.

To make matters worse, Carrick will be without several key first-team players due to suspension and injuries meaning he will have no major quality to call upon if he wants to change things up in the second half. The London outfit are the favourites to win on Sunday so if Man United can even pick up a point, it will be a job well done by Carrick, Phelan and co.

The defence will be a mess for Man United this weekend since Harry Maguire is ruled out with a suspension while Raphael Varane is recovering from a hamstring injury.

The absence of these two prominent centre-backs means Carrick will be using Eric Bailly and Lindelof as the main central defensive pairing against Chelsea and this is something that has mistakes written all over it.

Luke Shaw missed the Villarreal game due to a concussion and as per the latest updates, the left-back will go through a late fitness test on Sunday. If he is not fit then Alex Telles will hold onto his place.

Fred and McTominay will as usual pair up in defensive midfield but Michael Carrick has a key decision to make in terms of his main attacking midfielder.

Proud to score my first goal for @ManUtd in the best competition in world football @ChampionsLeague !
Great team effort from the boys tonight, we build from this. 🔴 pic.twitter.com/50Milb4Cc7

Donny van de Beek got to start in the No 10 role vs Villarreal but the Dutch international had a really poor game. Bruno Fernandes was introduced in the second half and immediately after this change, Man United were able to move onto the front foot.

This clearly goes to show that despite his lack of scoring, Fernandes should be the No 10 right now and against a team like Chelsea, Carrick will want all of his quality players to start.

Paul Pogba remains a long-term absentee with a thigh injury and he’s only expected to return some time in January.

Marcus Rashford came off the bench and made an instant impact in the 2-0 win so the England international will get to start on Sunday. Jadon Sancho scored his first goal for the OT outfit and his confidence levels are picking up with each passing game. And with Mason Greenwood out, the summer signing is a guaranteed starter on the right flank.

Cristiano Ronaldo once again saved the day for Man United, scoring the first goal on Tuesday and since Edinson Cavani is ruled out, the Portuguese will lead the line at Stamford Bridge. 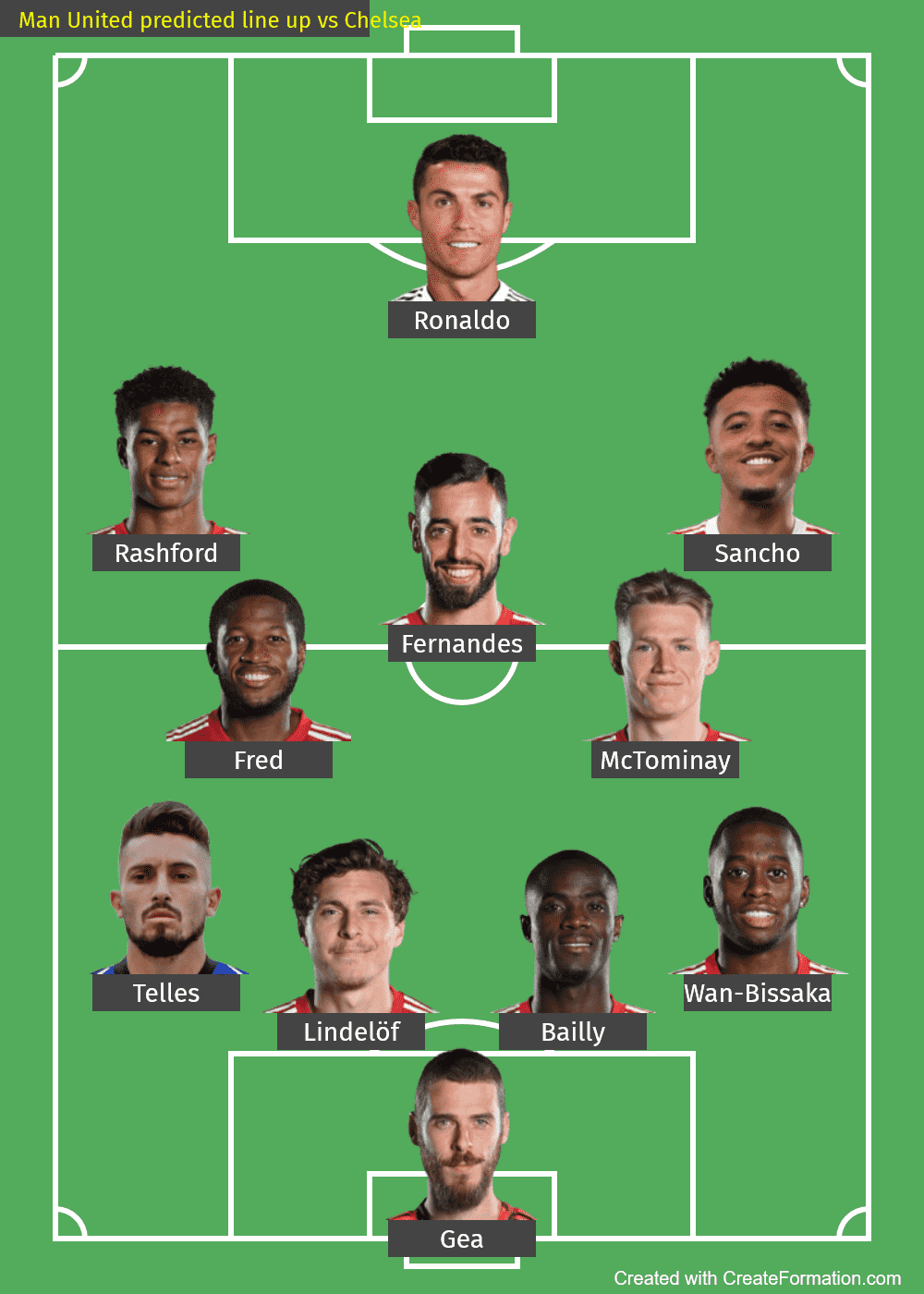