Man United are under massive pressure right now and there’s a big chance that the side might get a new manager after this matchweek.

There’s massive buzz that Ole Gunnar Solskjaer could be sacked after the Watford game as the board is currently scouting through various options to replace the Norwegian. United definitely need to pick up a win this weekend if they wish to even be relevant in the Premier League title race for the rest of the campaign.

Man United are undefeated in 30 of their last 31 away matches in the Premier League but after their losses to Liverpool and Man City, even Watford will be licking their lips.

The Hornets though are massively struggling this time around and given the star power that Ole has at his disposal, United should see this one through without any major hiccups. A three-pointer should help calm the nerves to some extent but they will need to back that up by winning in the Champions League next week.

Man United keeper David De Gea might have had a lapse in concentration against Manchester City but he’s also the reason why we didn’t see a repeat of the 5-0 scoreline.

De Gea’s has successfully reclaimed the No 1 spot meaning Dean Henderson will once again be watching from the bench.

The defence could be a major cause of concern for Solskjaer since Raphael Varane is currently ruled out with a hamstring injury and Harry Maguire has been in the worst form of his life.

The centre-back did have a good outing with England and hopefully, that can help lift his spirits this weekend.

Luke Shaw missed international duty with a head injury but the left-back should be back into the fold on Saturday, reprising his role on the left. However, the injury to Varane means Shaw will be playing as a full-back and not as a wing-back.

McTominay had a throat infection during the break but the midfielder should recover from it to start on Saturday. Ideally, Fred should be pushed back to the bench and maybe it’s time for Solskjaer to finally trust Donny van de Beek.

Luke Shaw: “It would be understandable if there were days where Donny would walk into the club a bit sad and disappointed. He’s not playing, he’s not getting a sniff. But he always trains well and he works hard, he always keeps the right attitude. For that he deserves credit.”🙌 pic.twitter.com/yUkOoHVGwf

The fans and the pundits are urging the Man United boss to use Donny in midfield but we doubt if the manager is going to make this selection against Watford.

Paul Pogba is still serving his ban meaning if Fred is not starting in midfield then Nemanja Matic is likely to partner McTominay.

Jadon Sancho has found it really hard to get game time since his summer move but there’s a major chance that he will get to start at Vicarage Road on the right-hand side with Rashford occupying the left flank.

Edinson Cavani has been struggling with discomfort in the tendon over the past few weeks and the South American might be an absentee this time around as well. If Cavani is not present then Cristiano Ronaldo should ideally be playing the full 90 minutes. 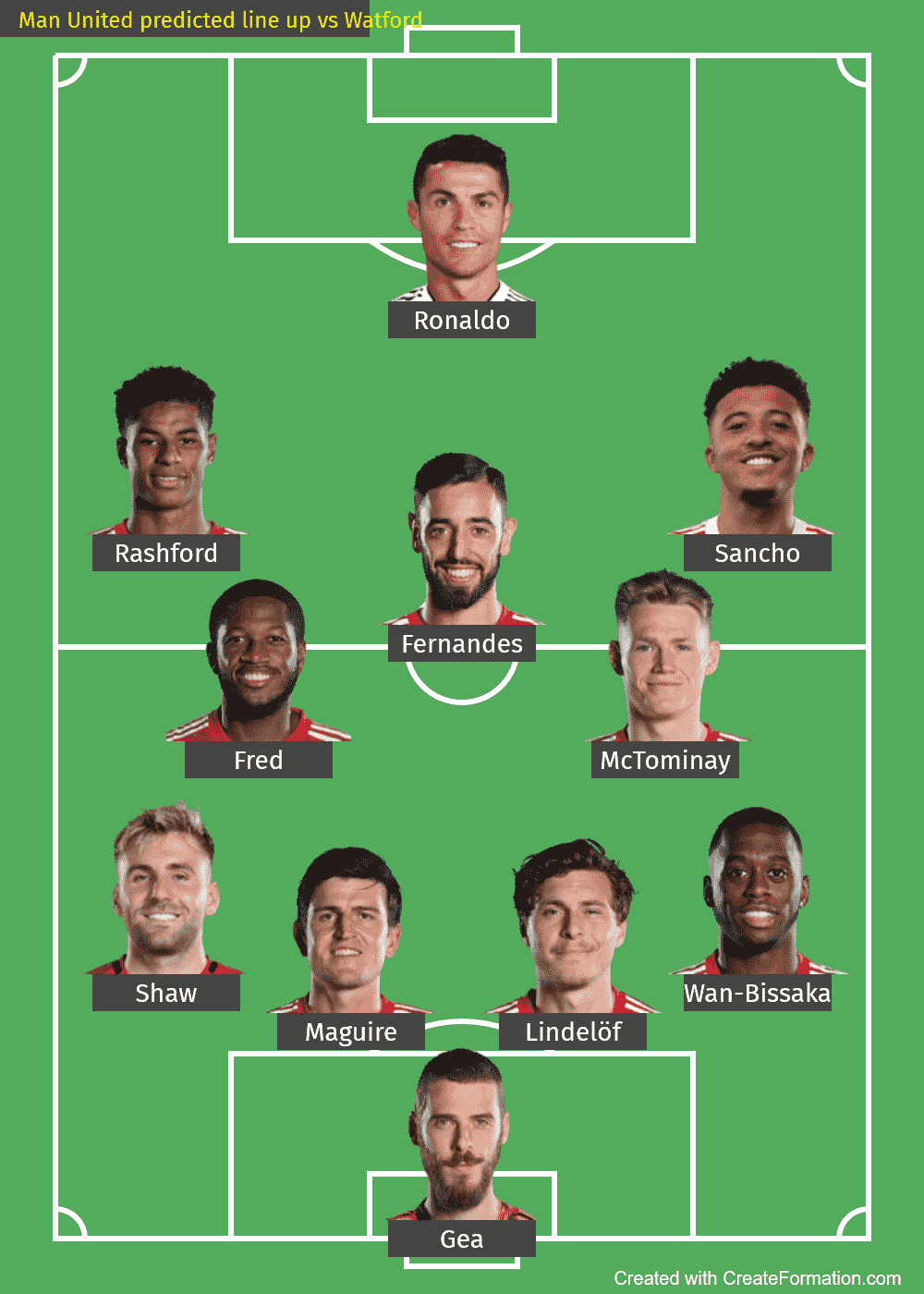 3-4-2-1 Spurs’ predicted line up vs Arsenal: Will Son come back or will Richarlison hold onto his place?

3-4-2-1 Spurs’ predicted line up vs Arsenal: Will Son come back or will Richarlison hold onto his place?

Antonio Conte has completely transformed Spurs in less than a year and they will now have the chance to move to the top of...
Read more