Spurs are turning things around under the guidance of their new manager and we saw a glimpse of that once again in midweek when Tottenham netted two stoppage-time goals to beat Leicester City 3-2.

The win means Spurs are now undefeated in their previous nine Premier League games and with wind under their sails, Tottenham will now take on Chelsea on Sunday.

It was just last week that the Blues knocked them out of the Carabao Cup so Antonio Conte will be itching to take revenge from his former side. Conte got his tactics horribly wrong in both the semi-final legs which is why he is going to be extra prepared this time around.

Due to some postponed games, Spurs have played only 19 matches so far and they are just one point behind the fourth spot meaning if they can pick up all three points on Sunday then they will be the favourites to nab that final Champions League spot. Based on the Carabao Cup results, Chelsea should be the favourites to win during the weekend but since the 2nd leg, Tuchel’s side have lost to Man City and then drawn against Brighton. This means if Tottenham can get it strategically right then there’s every chance they come out of the Bridge with a win.

Antonio Conte should opt for his favoured 3-4-1-2 formation but since Eric Dier is out with a muscle injury, the two wing-backs will drop and form a back-five as and when necessary.

Reguilon and Emerson both had pretty solid outings during midweek so they are going to hold onto their place which means Sessegnon is going to have to watch from the bench.

But with Dier and Romero ruled out, Ben Davies is going to be the third central defender, alongside Tanganga and Davinson Sanchez.

SPURS HAVE STOLEN IT! 😱

Two goals in two minutes as Steven Bergwijn comes up clutch for Tottenham! 😤

He hadn’t scored a Premier League goal all season before tonight… pic.twitter.com/ncrFoKLQPZ

Oliver Skipp failed to impress against the Foxes, losing as many as four duels so he is expected to drop to the bench while Harry Winks and Hojbjerg pair up in central midfield.

With this slight change in formation expected, Lo Celso should also be coming back into the starting line up for Spurs, operating in that No 10 role.

Bergwijn was the star of the show in that 3-2 win and his rapid pace could be of great benefit for Antonio Conte on Sunday. With Chelsea a bit unnerved after dropping so many points, there’s every possibility the manager opts to use Bergwijn in place of Lucas Moura.

Spurs predicted line up vs Chelsea: 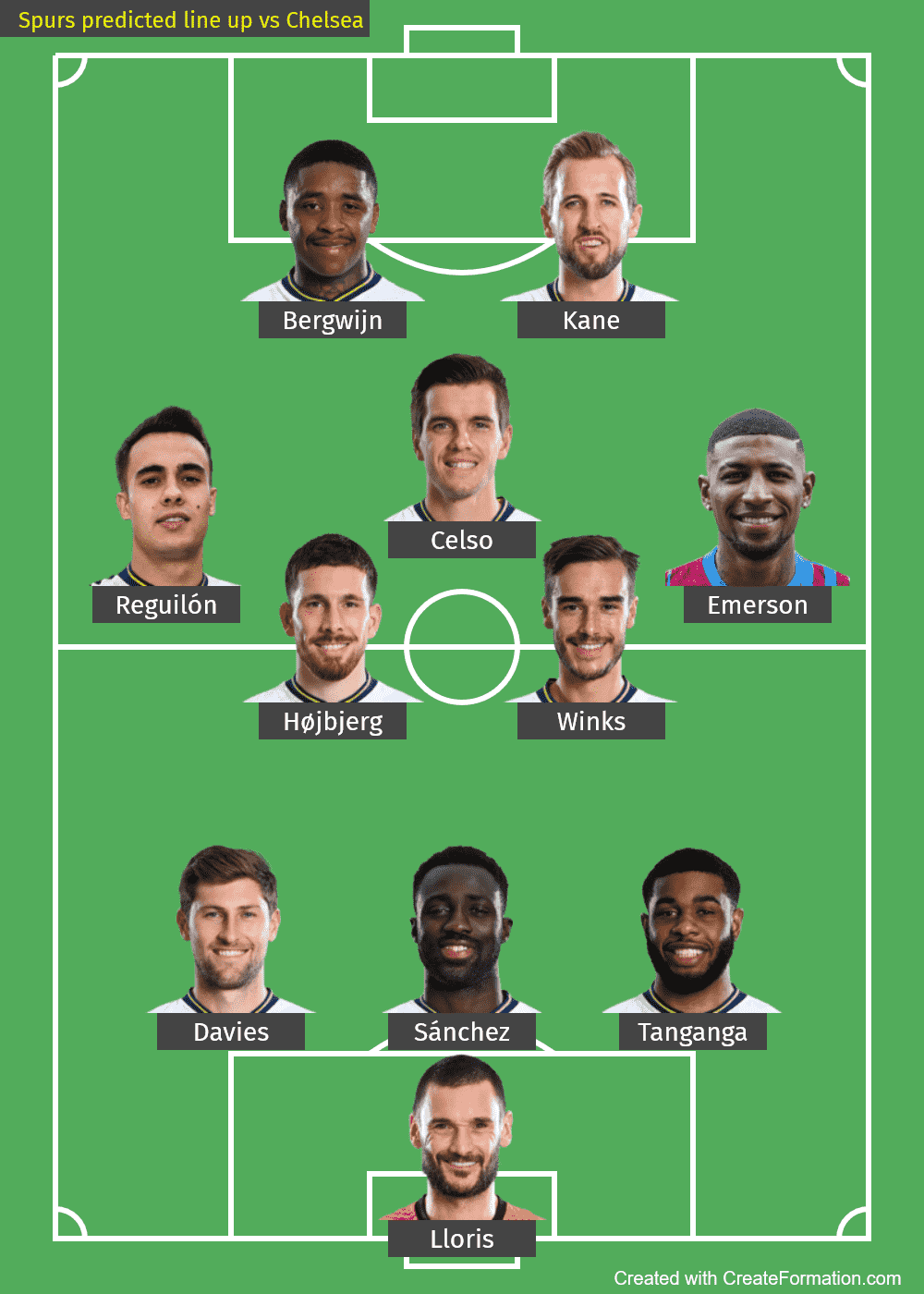 Read: Is this ex-Chelsea superstar set to make a comeback to the Premier League?